The renowned pilot only requested permission to land in Tekah Aerodrome, Taiping in case she needed to stop to refuel. 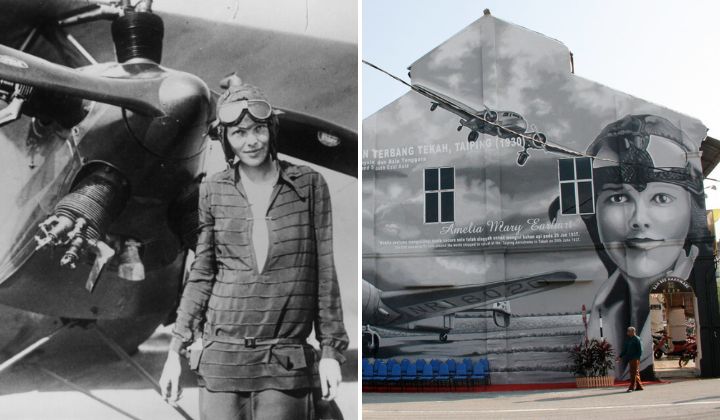 The grayscale mural of the renowned pilot Amelia Earhart on a wall of a shophouse at Jalan Abdul Jalil in Taiping made it into the Malaysia Book of Records as the Biggest Outdoor 3D Mural Painting.

While that is a feat itself, those who know their history know that a homage to the pilot in a town in Malaysia is perplexing.

According to Perak Heritage Association secretary Nor Hisham Zulkiflee, Earhart only sought permission to land at the Tekah Aerodrome in Taiping during her solo flight around the world in 1937.

She was flying to Singapore and made the request in case she needed to refuel, The Star reported.

However, she never made any stops in Malaysia and flew straight to Singapore instead.

The mural, measuring 14.6m tall and 27.4m wide, was completed in 2019. Six artists completed the artwork over three months using weatherproof paint as a collaboration between the municipal council and Positive Sign Advertising Sdn Bhd.

Despite voicing their concerns about the mural, the input from Perak Heritage Association was ignored.

Historical facts must not be changed, as it’s something the whole world will be reading about.

State Housing, local government and tourism committee chairman Datuk Nolee Ashilin Mohamed Radzi said she had yet to receive any official complaint about the issue.

However, she will ask the municipal council to check on the matter and rectify the issue if there are indeed contradicting facts.

135YO Raintree In Taiping Uprooted After A Storm, Restoration Efforts Underway

From Gangsta’s Paradise To Nature’s Sanctuary: Taiping Lake Gardens Was Once Home To The Triads