He said those who can accept satirical works of others should be able to accept it if the same was said about them. 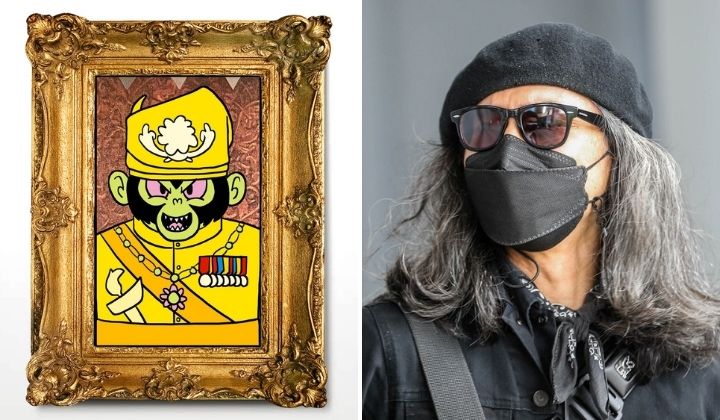 Malaysian satirical artist Fahmi Reza is heading to Bukit Aman once again for his controversial artworks.

This time he posted an image of Mojo Jojo, a villainous character from the kids’ show Powerpuff Girls, in a yellow royal garb that resembles the attire worn by the sultan.

According to Malaysiakini, the artist posted a statement three hours after the picture went online to explain the latest artwork.

He said those who can accept satirical works which equalise others to an ape should be able to accept it if the same was said of them.

While he didn’t point out names, it’s believed that he was responding to news of Sultan of Selangor Sultan Sharafuddin Idris Shah purchasing a painting that depicts MPs as monkeys, apes and frogs.

READ MORE: Selangor Sultan Bought A Painting Of Parliament, But All The MPs Are Apes And Frogs

The next day, Fahmi posted another tweet to tell followers that he has been called up by the police in less than 15 hours.

He’s asked to be present at the police station today, 14 April, to assist in an investigation under Sedition Act 1948.

I’ve received a phone call from Bukit Aman. It hasn’t even been 15 hours but the police have opened investigation papers under the #AktaHasutan (Sedition Act) and #AktaSakitHati for my graphic satire of a #monkey that I posted last night. Police have asked me to come in for questioning this evening. See you there soon PDRM.

According to Malay Mail, #AktaSakitHati is Fahmi’s way of referring to Section 233 of the Communications and Multimedia Act, under which he was charged previously for putting up posts of a similar nature.

Fahmi added that if he didn’t update his social media before 8pm, it means he’s spending the night in lockup.

He reminded everyone that they have the right to refuse to answer questions from the police to protect themselves under Section 112 of the Criminal Procedure Code.