The non-stop downpour since yesterday afternoon caused some areas in Klang to flood. 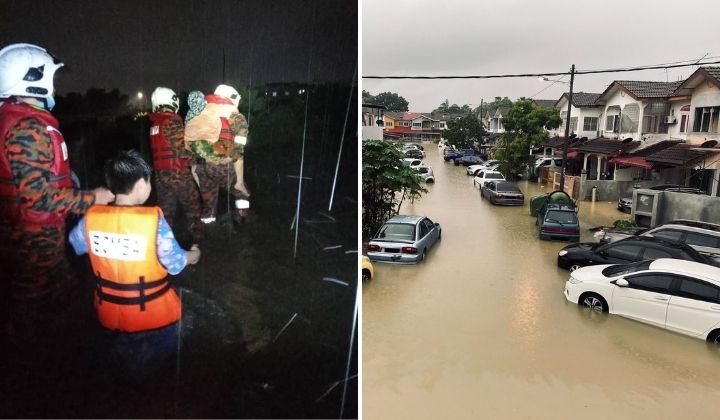 The heavy downpour, which started since 2pm yesterday (17 December), has caused several areas in Klang to be heavily flooded.

According to Malaysiakini, three flood temporary relief centres (PPS) have been activated in the Klang district as of 10pm last night.

Three PPS have been set up to assist 113 victims based on information received from District Disaster Management Committee.

The three PPS are at:

According to Selangor Fire and Rescue director Norazam Khamis, among the areas flooded under one meter of water were Kampung Nelayan, Teluk Gong and Port Klang, involving 106 victims.

The department was still actively conducting search and rescue operations.

In another report by The Star, Port Klang was the worst-hit area, and there was a power outage there too.

Residents said the last time Klang flooded this badly was about 50 years ago when water overflowed from rivers, drains and retention ponds into residential areas.

Netizens share images of the flood in other areas

Klang MP Charles Santiago posted on Twitter that he had asked for RM6 million in Parliament last week to help clear the drains in Klang to avoid floods.

He also asked the Public Works Department (JKR) to renegotiate its current concession agreement of clearing drains, from once in six months to weekly.

He was also in Port Klang coordinating with the relevant authorities to monitor the situation.

In Parliament last week, I asked for a RM6-million urgent support to clear the drains in Klang to avoid floods and about 50million to repair the pot holes. I also asked JKR to renegotiate its present concession agreement of clearing drains once in six months to weekly.

I am at Port Klang now and coordinating with relevant authorities to monitor the ground situation.

We are aware of the amount of rain fall: Teluk gong 279mm;
Pandamaran 181.5mm and 239.5mm in Selat Muara Station which covers Pandamaran, totalling 700mm and making it impossible pic.twitter.com/n7xFuYxUob

Netizens online shared images and videos of the flood across Klang. Some even offered help to those who need it.

Klang is heavily flooded at the moment. If you need any sort of help, please don’t hesitate to reach out. We will be sending flood relief teams over to help out. Do Dm me or let me know if your area is affected. pic.twitter.com/rMnMCRTDIU

The flood has also brought in an uninvited guest into a home in Klang.

A netizen said the flood serves as a reminder to everyone that something must be done about climate change before it’s too late.

The floods in the Klang Valley is a reminder that more must be done to tackle and resolve climate issues. We are too reactionary and too relaxed. We are lucky we don't face the full wrath of a typhoon.