These Malaysian politicians can do more than just debate policies, they can apparently act in in our film and music industry too. 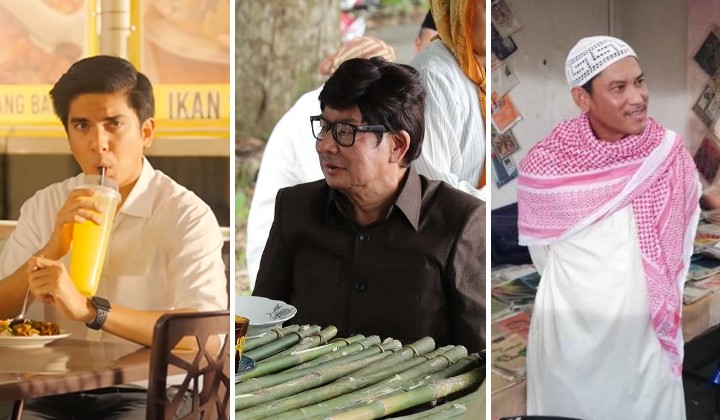 For years, we have seen them as politicians, debating on policies and doing what politicians do.

But did you know some Malaysian politicians also dabbled a bit in acting? They’re quite a natural at it too. Well, for SOME. Some should just, stick to policymaking…

Here are some Malaysian politicians who have made brief appearances or were featured in our nation’s film and music industry.

Are they any good? You be the judge.

Our former Health Minister KJ has played many political roles in his life.

But did you know that this politician also starred in several short films?

He played an Ayam Percik seller in a short film called Inspektor Mastura, directed by Elaine Daly back in 2013.

In this film, he was seen trying to make a move on the female character, which was the police inspector. He gave her a free chicken, okay! If that’s not flirting then we don’t know what is.

Besides that, he also starred in a series of short films produced by Pete Teo in 2009 called 15 Malaysia. In a film called Taxi Driver, he played the role of the driver who shared his opinions on Malaysian politics and sentiments while driving around KL. “Today you want to eat wind or wash eyes?”, is may be one of the greatest quotes we have heard from KJ to date.

Additionally, he also played a role as Ahmad Khairy Jamal Udeen Chowdury, a Bangladeshi Alam Flora garbage collector in 2016. He stressed the importance of waste management and how to look after the environment in Malaysia, his beloved adopted country.

Judging by his acting skills, it is safe to say that he was one of the most dramatic garbage collectors we have ever seen. You can catch the full video here.

He’s actually quite gifted in acting, don’t you think? Perhaps he should consider acting now that he’s not an MP anymore. 👀

Our former 6th Prime Minister also tried dabbling in the film industry too.

He played the character of his own father, Tun Abdul Razak in an RTM drama series called Tunjang.

Tunjang or ‘support’ is about the early settlers in the 60s. The story tells of the struggles of the late Tun Abdul Razak and how the Federal Land Development Authority (FELDA) came to be.

He filmed the cameo part dressed in a fancy wig and a fedora hat last 25 June. Does he look pretty convincing as his late father? We’ll soon find out once Tunjang airs on RTM.

Ahmad Faizal Azumu or Peja was formerly the chief minister of Perak and also the former Minister of Youth & Sports.

Last July, we got to see a glimpse of Faizal Azumu’s acting skills when he played Pak Peja, an athlete defender in Astro Ria’s Ratu Ten Pin 2.

In the 31-second clip, he was seen defending Jasmin Suraya, who played Shalin Zulkifli, our former national tenpin bowling queen from being egged by two assailants. Wah, such a hero. 👏🏽

He was also seen playing a Sheikh who sold religious books and gave religious advice to the protagonist in a film called Buntat in 2018. Buntat was a film directed by comedian Sabri Yunus which tells the story of a boy who ran away from his village in 1968 to perform haj in Mecca.

Sadly we can’t find a clip of his acting, but, we do have pictures of him as a religious bookseller complete with the white robe and kopiah. Would you buy books from him if he was selling them?

Besides that, not only is he talented in acting, but apparently, he can sing too!

Faizal Azumu was featured in a Perakian Eid song called “Moh Beraya” along with Jamal Abdillah and Shiha Zikir.

Liow was formerly the Minister of Transport and Bentong MP from 1999 to 2018.

While he was the Minister of Health in 2009, he played himself in a short film called Healthy Paranoia, in the same 15 Malaysia film project commemorating Malaysia’s Independence, produced by Pete Teo. He played the role of a politician, so we guess, he’s pretty good at it.

In conjunction with the 2017 National Day celebration, he also starred in an advertisement directed by Pete Teo and Liew Seng Tat, called Citizens. Tiong Lai played not only one but double roles as a minister and a citizen conversing with each other on the spirit of nation-building.

It’s quite dramatic, him arguing with himself.

Tun Dr Mahathir Mohamad is no stranger to Malaysians, young and old.

If you have been the Prime Minister of Malaysia twice and didn’t get a cameo in any film, we just don’t know what to say.

The longest-serving prime minister of Malaysia cameoed as himself in a historical science-fiction film in 2015.

The film called Kapsul, tells a story of a high-tech security expert Zohri Ibrahim, played by Faizal Hussein, stealing a time capsule planted by Dr Mahathir and accidentally travelled back in time to before Malaysia’s independence.

In the film, Dr Mahathir appeared in a small scene towards the end of the movie where he pats the protagonist on the back and gave a short but meaningful advice.

Tun M had to shoot more than one take for his scene.

“I asked for payment but they don’t want to give me,” he joked in an interview back then.

READ MORE: GE15: Here’s All You Need To Know About Syed Saddiq

In Namawee’s recent Katak (frog) song, Syed Saddiq played himself in the MV and even went along to dance in unison with the dance crew. The song Katak was actually a mockery of Malaysian politicians who liked to jump parties.

Besides that, not only is he talented in dancing, but Syed Saddiq can apparently rap too!

During this year’s Deepavali, he collaborated with some local artists and rapped his way regarding Indian equality in Malaysia. We weren’t even sure if he could sing, but he definitely showed us that he’s talented in many ways.

Happy Deepavali to all my brothers and sisters.

In the same 15 Malaysia project produced by Pete Teo in 2009, one short film was named One Future and it featured Tian Chua in the lead role. Although he was the main character in this film, he didn’t utter a word in there because this was one of those experimental silent films.

The science fiction film depicted Malaysia as an Orwellian dystopia where everything set by the government is perfect, except no one is allowed to speak.

But something goes wrong when Tian Chua couldn’t follow the routine due to the government’s system error. Watch how he voiced out to the government and got jailed for doing so. The analogy sounds pretty familiar, does it?

Formerly the Minister of Education under the Pakatan Harapan administration and Simpang Renggam MP, Dr Maszlee Malik has also dabbled in acting.

Recently, he played Jamal Banna in Kudeta, a serial drama on Astro Ria and Astro On Demand. Kudeta tells a story of a woman Prime Minister and her political challenges in a nation called Masraya. Netizens are saying that this film has some similarities with Malaysian politics. 👀

In this film, Maszlee Malik plays a corrupt politician who ended up in prison. The series started airing on Astro On Demand on 20 November.

Besides that, Maszlee was also featured in a 2021 short film called Taruh, a parody of Netflix’s Squid Game as player No. 237, produced by Cineplus Asia. Watch how our ex-Education Minister takes his role seriously in this trailer. You can watch the full short film here too.

So, what do you think about our politicians’ acting skills? Should they change jobs or should they just stay in politics?

Do you know any more Malaysian politicians that were featured in films or MVs?

READ MORE: Anwar Ibrahim Is Getting His Own Movie, With Farid Kamil As The Lead