From putting spices to drying them out, here are some tips passed down for generations to separate ants from sugar. 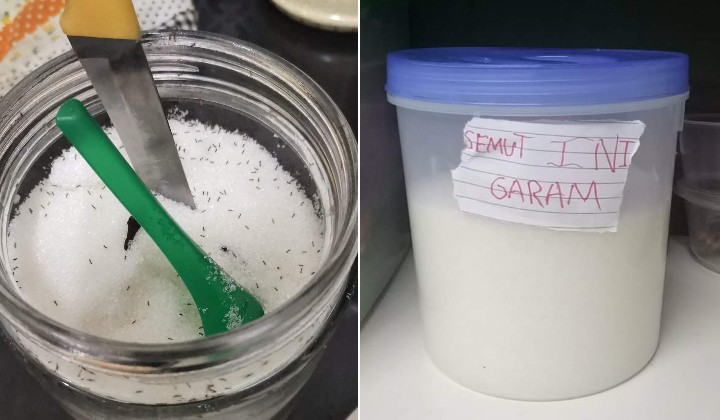 Have you ever had the problem of ants in your sugar jar?

They can even be found in a sugar packet you just bought a few days ago (the audacity of those ants). Well, you can’t just simply throw away a brand new packet of sugar – that would be a waste.

How about you try these simple natural ways of beridding the ants from your sugar jar or packet?

Just put a few of them in the jar and don’t close the lid too tight, they need an escape exit.

Leave the jar for a few hours and you’ll find the ants marching off to other places. It doesn’t kill the ants but it does keep them away as ants do not like their scent.

Just make sure to get the spices out after awhile to avoid the smell of it lingering to your drinks.

Watch this video on TikTok of how @kakrad76 got rid of the ants in her sugar container just half an hour.

This works the same way with the four siblings.

Just put a few of them in the container or jar. For the dry chilli, you can even cut them in half or small chunks to get them spread around the sugar.

Close the lid (not too tight) and leave it overnight.

Ants detest the odour coming from these ingredients, much like the spices above. It wont kill them it hopefully will send them away from your sugar jar.

3. Put the jar in another container with water

We honestly do not know how far this goes but according to some home remedies, it works.

A Facebook user, Zura Yusoff, shared her method of keeping the infested sugar container free from ants by using this method.

You simply take a bigger container and fill it with a few inches of water. Then put in the sugar jar in and leave it for a few hours.

Magically the ants marches out.

Fun Fact: Ants dont really eat the food they found directly at the source. They carry it back to their colony (that’s how the ant poison works).

So for this method, the ants are supposedly carrying the sugar back to their hives but will drown because of the ‘moat’ around the container. Tada!

4. Dry them out under the sunlight

Have you ever wondered why our elders usually dry rice or sugar out in the sun? No, they’re not wet if that’s what you’re wondering.

READ MORE: Ever Wondered Where These Beetle Looking Bugs In Our Rice Pack Came From?

Apparently bugs do not like high temperatures (much like us too lah) and will simply walk out of the rice or sugar.

So just pour your ant infested jar or packet of sugar onto a flat tray and lay them out in the sun for half an hour or till you notice them gone.

Don’t forget to get them back inside once the sun’s gone or you’ll end up getting more ants or other animals in there.

5. Put the jar or container near the stove

As explained before, ants cannot deal with extreme temperatures, so try to lay the ants out in a glass or metal plate first.

Then put them near an open stove. While you cook, notice the ants making a break away from the plate.

Don’t put them directly on the plate. They’ll die and it’s another hassle to get dead ants out of there.

6. Keep the jar in the refrigerator

Another useful way to keep ants away using temperature is to close the lid tightly and chuck it in the refrigerator! The cold zone, not the freezer.

Because ants cannot stand cool temperatures, they’ll try to leave the jar. And when they do, they’ll freeze near the exit.

Next time you pick up the jar, you’ll get them all in one place near the lid (hopefully).

If you put them in the freezer, they ants could freeze up in the sugar and it’ll be another hassle.

It doesn’t always work but it is the fastest and easiest way that you can try.

Another simple trick you can try as a last option is to make sugar syrup.

Just add water to the mixture and stir until it all dissolves. Then take a strainer and strain away the ants.

You can either store the solution in an airtight container or freeze them into ice cube trays and you’ll get ice sugar cubes to add on into your drinks next time.

Believe it or not, accidentally drinking drinks with ants does not make you forgetful (some people do believe in this superstition, fyi).

There’s no scientific fact to support this and some people in other part of the world even eat ants as a snack.

So the next time you get ants in your sugar, there’s no need to throw them all out! Just try these easy hacks and let us know if it works!

READ MORE: Did You Know That Cockroaches Taste Like Cottage Cheese?

READ MORE: What Are Those Bugs In Your House? 4 Pests You Need To Know

3 Hacks To Get Rid Of Disgusting Cockroaches In Your Car