From crawling critters to slithering insects, these household pests can really get on your nerves. 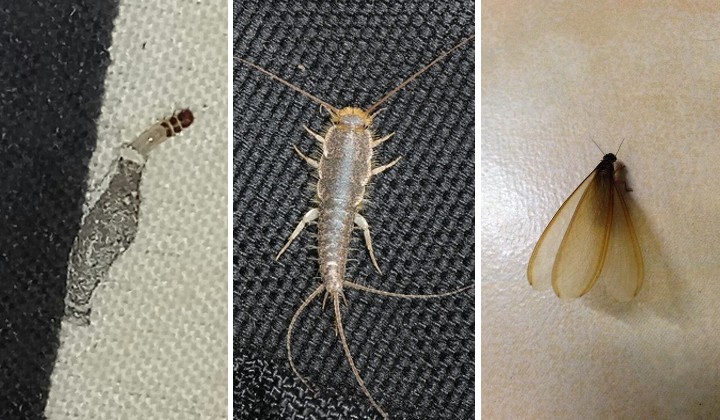 Have you ever been in a situation where you know these types of bugs but you just don’t know their names? It’s frustrating, isn’t it?

“You know, the ones usually found in our houses, they move like worms, the brown ones in bags”

Well, we got you, fam. Here are some of the names of bugs normally found in your house that you might not know the names of.

Now, these guys went viral a lot of times before on Twitter. They’re the little kuaci-sized things you usually find attached to your walls. That’s actually a cocoon for a worm called Plaster Bagworms or Household Casebearers.

In Malay and Indonesian, people call them Kamitetep. So these ‘worms’ will eventually turn into a moth later on. During its larval stage, these guys carry around their self-made cocoon from silk, sand, and other debris for protection. Their cucumber seed-like cases have two openings at the end, so the larvae can crawl out either exit to forage food or dart away from predators.

You can find them randomly on your walls, baseboards, under chairs, and at the edges of rugs. They usually eat silk, wool, shedded hairs, dead insects and especially spiderwebs. That’s why you need to clean your nook and crannies people!

They are found in areas of the room that has high humidity like bathrooms, kitchens, garages, and closets. Although they do not eat cotton or nylon, be sure to inspect your silk and wool clothes.

While they are not poisonous and are generally not harmful, they may be irritating to some. Some people might be more sensitive to these things where in some cases they may develop itchy bumps.

So if you see these guys, it’s spring cleaning time!

Silverfish or locally called Gegat (yes, that’s what ubat gegat or mothballs are for apparently), are small insects that can infest your home. These tiny nocturnal creatures got their name from the colour of their scales, which are silver or metallic brown.

Fun fact: Silverfish are one of the oldest insects in the world! They’ve been crawling around for more than 400 million years (they even predate dinosaurs by 100 million years). Those pesky little grandpas!

Silverfish are slender, wingless and have three tail bristles at the end of their bodies. They’re mostly found in moist and humid places such as bathrooms, kitchens, basements, attics or laundry rooms. Oh and they slither too. Extremely fast! One second you spot them and another second they’re gone!

Silverfish feed on the sugar and starch of household items like books, photographs, documents and wallpaper. As they are in fact scavengers, they can feed on fallen hair, dandruff, other insects, flour, cereals and food scraps. They can also damage clothing such as silk, cotton and also linen (that’s why we put the mothballs in our cupboards).

They are not harmful to humans but they do destroy our possessions. They are known to contaminate food, stain clothing, and destroy old books and photographs. There are also cases where they can trigger allergies. So, if you see them, act quick! A second of hesitation and they’re gone.

Rove beetles or better known as Carli ants in Malaysia are beetles that look like ants! Their bodies have orange and black alternating colours and they can be very dangerous to the human skin.

They mostly live in humid places as well and can be found in paddy fields, lakes, drains, riverbanks and even palm oil plantations too. In Malaysia, they’re usually found in the northern states like Kedah, Perlis and Penang but cases in other states are recorded too.

They are known to infest hostel buildings (every hostel or boarding school student will definitely know them), campuses, condos, and even government quarters.

Although they don’t bite, the liquid in their butts is in fact toxic. If you accidentally squash them or threaten them, they’ll release the toxin called paederin. And they will cause your skin to burn. It’ll cause painful rashes, blisters and even conjunctivitis if the toxin accidentally reaches the eye.

It feels like an acid burn! So be careful around these peeps! They’re not regular ants!

If you’re not familiar with this animal, then you’ve been living under a rock. Malaysians call these Kekatu or ‘a pain in our butt’ insects (they’re everywhere when it’s their season!).

Okay, let’s go into a brief entomology class. Termites (yes, those eating your bathroom floorboards right now), have castes or groups. Every caste has its own role in the termite colony. Here are the 4 known castes:

So in a colony, the queen will lay the eggs. Then the eggs will produce larvae and turn into nymphs, where they can grow into either workers (build the nest and feed the young), soldiers (guard the nest) or alates (mate & reproduce new colonies). The female and male alates will fly off the nest in swarms and usually target brightly lit places to find their true love.

They usually emerge when it’s warm and the humidity is high, especially after rain. After they’ve successfully mated, they’ll descend to the ground and shed off their wings (yes, those are the ones we usually have to clean up in the morning). Then, the couple will walk around and find a new place to establish their new colony as future king and queen termites. Well, not every couple makes it alive though, they could be external factors killing most of them (like us humans).

These alates do not harm humans but their offsprings destroy properties made from wood (houses, furniture, etc). If you notice an alarming amount of these insects flying around your house, then there might be a termite nest nearby. Better check these places carefully.

All in all, these are the types of bugs that are considered pests in a household. You might recognize them but just don’t know what they’re called.

Do you have any more of these bugs that we should know about? The stinky bugs or the jumpy critters? Share the deets with us and we might do a Part 2.