Charlie Ants are actually poisonous creatures that can cause painful rashes and blisters. 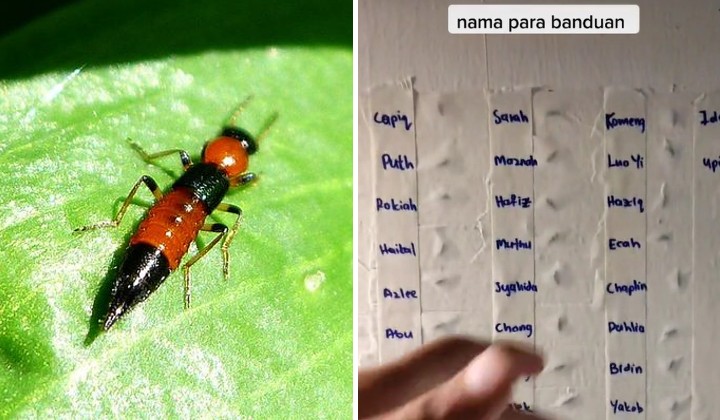 If you have never heard of Charlie Ants, then clearly, you’ve never lived in a hostel or, you’re not from the Northern part of Peninsular Malaysia.

There’s just something about these guys that make a hostel student’s life scary because they’re always found in dormitories! Those who are used to its visits, well, they got creative.

Recently, a college student, @syafff_betta and his friends made a video of how they caught a Charlie ant, manually with a masking tape. But what’s funny isn’t the way that they caught the bug, it’s the way they ‘honour’ the pesky poisonous bugs.

Behold, the hall of the fallen soldiers (or prisoners)

After they caught the little runner by sticking it onto a tape, they pasted the tape onto a – what appears to be a wall of plastered ‘victims’.

For those who wonder, yes that is quite a common way to manually catch these bugs (apart from using insect sprays). You can’t squeeze it or swat it down like a fly. It is said that if the secreted fluid gets everywhere, it’ll attract their brothers and sisters more! So, gotta be careful not to accidentally burst the bug’s butt!

Usually, people would just catch the charlie ants like that and leave them until they can discard them but these guys went extra.

Perhaps they wanted to know exactly how many of these pesky creatures are ruining their lives. They’re trying to prove a point there.

This hall of ‘fame’ humoured netizens

A lot of people were both stunned and amused by their actions. They even made jokes.

“Wah, employee of the month is it?”

“That’s a nice eco-friendly wallpaper you have there”

“Bruh, is that a multiplication table?”

“If the whole wall is complete, you can open a muzium, kid”

“Charlie ant to other charlie ant on the wall: Eh, dude, you’re here too? What a small world!”

They even named them for a proper ‘burial’

Following his commenters’ suggestions, he and his friends named each of the bugs that were caught.

Well, it makes it easier to know which is which in the plastered-wall ‘cemetery’, right? At least they won’t get lost when they come for the next cemetery ‘visit’.

What are Charlie Ants?

Surprisingly, based on the comments on his video, a lot of people still do not know what these pesky critters are.

They’re not just regular bugs, oh no, they’re actually poisonous bugs that can pack quite a punch with their toxin. It burns!

Charlie ants (semut kayap/rove beetle/semut charli/tomcat) are actually beetles, not ants. They’re called so by locals in Malaysia because they resemble ants. They come from the genus Paederus.

They are normally found in abundance in states like Penang, Kedah and Perlis but there have been cases of it in Kelantan and other states too. They usually live in moist areas like paddy fields, lakes, drains, riverbanks and even palm oil plantations too.

Additionally, like most insects, they are attracted to light and they can fly. So that’s probably why they can be found in high buildings (sometimes the wind can carry them in) like condos and apartments too.

How to differentiate them from regular ants?

Thanks to @syafff_betta, he also explained the difference between a regular ant and the Charlie ant.

How dangerous are they?

They have been a lot of cases where these creatures infested hostel buildings, campuses, condos, apartments and even government quarters.

They do not bite or inject their victims with venom. Instead, when they feel threatened (it’s a self-defense technique), their body will secrete a toxin called paederin which can cause burning rashes and blisters on humans. They can even cause conjunctivitis if the toxin is accidentally spread to the eyes.

Some say that the toxin felt like acid burning through your skin!

The medical term for the rashes is called dermatitis linearis or paederus dermatitis. It’s not pretty and it definitely hurts, especially for small children.

Ways to keep safe from them

If you come across these guys, follow these steps.

So, next time you see these guys, remember not to squeeze them! Be very careful around them!

Hey, you could even do an insect wallpaper like those guys if you’re up for it.

READ MORE: Help Me! There’s Something Stuck In My Ear!

READ MORE: These Flea-Like Sea Critters Are Actually A Delicacy!

What Are Those Bugs In Your House? 4 Pests You Need To Know