They are said to taste like crabs, but with a prawny twist. Best of both worlds. 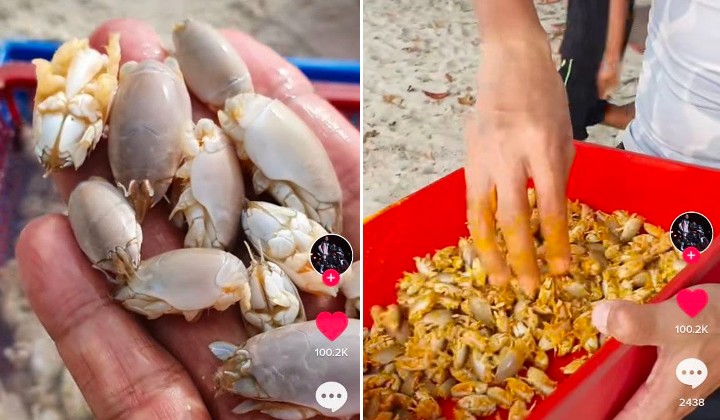 In the video, he is seen digging a strainer into the sand and filtering it with his friends before three little flea-like bugs popped out.

The creator then soaked their catch for the day and later seasoned them with turmeric powder and salt. Hey, nothing beats a simple lazy dish better than ‘Goreng Kunyit’, right?

Next, to the hot frying oil they go! It’s like watching a cooking show by the beach, really. The mini crawlies look exactly like mini crabs, turning from greyish to a whitish red color when they’re cooked.

After it’s fresh out of the wok, a person is seen tasting the dish, pointing which one has eggs and which doesn’t. Ngl, they look delicious though.

What Are Those, Exactly?

These tiny critters are called by many names such as Mole Crabs, Sand Fleas, Sand Crabs, and Sand Bugs.

It’s no different here in Malaysia, as the northern people call it ‘Yat Yat’ while people from the east coast call it ‘Ibu Remis’.

They are basically small crustaceans similar to crabs, prawns, and lobsters, but significantly, tinier. Picture baby crabs, but rounder.

They thrive on sandy beaches, specifically called the swash zone where the waves meet the sand. These filter feeders are expert sand diggers, hence the mole-name.

They can be eaten in many ways, fried, boiled, or roasted. They are also used as baits for some fishermen.

In our country, they can be seen on beaches after a monsoon. Villagers and tourists can be seen enjoying their time with families, digging for these crustaceans.

Okay, let’s be real, some of us don’t even know these exist, let alone how to cook them. Albeit the interesting discovery, a few people have split reactions to the method of cooking done by the TikTok user.

One user replied, “How else are you supposed to kill it first, drowning them in water?”.

Another person pointed sarcastically, “For those who are commenting on why frying them alive, could you guys tell us how to slaughter the critters one-by-one? Do tag me in the tutorial, please.”

Other netizens were just awed by the discovery of this delicacy and some suggested that this can also be roasted on a stick. For those wondering how they taste like, one netizen described them to be exactly like baby crabs, crunchily delicious.

Regardless of how these are cooked or eaten, to each their own, right? Even if it looks weird to some, it doesn’t necessarily mean that it’s wrong or illegal. We should respect each other’s culture, shouldn’t we?

‘Ikan Siakap’ Restaurateur To Be Taken To Court