Floods pose a serious public health risk through the spread of vector-borne diseases transmitted by flies and mosquitoes. 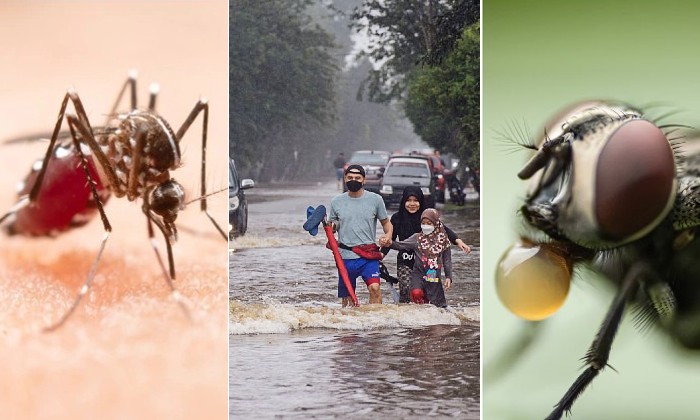 Floods are the most frequent form of natural disaster that happens here in Malaysia with our tropical climate and annual monsoon season (and also cough*cough – deforestation, over-development, inadequate infrastructures, and of course, the global climate crisis, just to top it all off…).

Even the slightest of downpours can sometimes cause flash floods in major populated areas, rivers to overflow their banks and even coastal floods – where dry and low-laying areas are submerged by rising seawater that swells up to shore during storms and tsunamis.

Read More: Major Flood Once Every 50 Years: How The Recent Flood Stacks Up Against Previous Catastrophes

These disasters, more than often enough, cause widespread devastation that results in tragic losses of life, injuries as well as damages to personal and public property.

Another side-effect of flooding, of course, comes as a hazard to public health.

Flood areas can sometimes bring about outbreaks of debilitating and deadly diseases brought on by the creatures that thrive off such human calamities.

Though most people would sight the obvious danger of the larger, more toothy animals like snakes, crocodiles and other wildlife that were washed into our towns and residential areas by the rising waters.

In truth, it is the tiny, toothless and mostly annoying “bugs” that tend to swarm after the floodwaters have receded that can pose the most risk to human life by being vectors or agents of disease.

The not-so-humble fly can definitely be a menace. Besides being a nuisance both indoors and outdoors, these pests are also carriers and transmitters of harmful germs and illnesses.

Through no fault of their own, fly numbers can increase exponentially following periods of heavy rains and floods due to the availability of rotting organic matter such as food scraps, garbage, faeces, dead plants and animals, and even raw sewage that can be left exposed and unattended when the water eventually recedes.

The fly’s short life cycle – which only takes between four to seven days for an adult fly to lay hundreds of eggs, that turn into maggots, that themselves turn into more adult flies that repeat the cycle – is also partly a reason for an explosion in their numbers during such natural disasters.

Though most flies, like the common housefly, do not bite, they do transport various parasites, bacteria and viruses resulting in a number of infectious diseases like dysentery, diarrhoea, typhoid and cholera.

They do so by carrying these harmful germs on their bodies and in their stomach, and by simply landing on people, any number of exposed food items or even the cutlery that we use to eat, these germs can be transferred to us when we ingest the infected item.

Health experts, including those with the Health Ministry, recommends for the public to take great caution and immediate action to control the number of fly population immediately after floods by:

1. Get rid of their food and breeding grounds

The best way to eliminate flies is to remove the things that they thrive on. The public is advised to keep an eye out for any piles of decaying waste that can accumulate after floods.

The next step is to ensure that all manner of waste is properly sealed away and disposed of at an appropriate location, away from populated areas.

Denizens are also advised to dispose of any dead and decaying animal carcases by burying ‘em at least four feet underground to prevent flies from swarming over ‘em. The same can be done to other biodegradable waste materials like food scraps, faeces and manure because flies can’t really dig that deep into the ground.

Although flies can naturally travel and cover large distances, their presence in large numbers can only mean that there are decaying piles of waste somewhere that need to be taken care of.

If you find flies or maggots anywhere around you, it’s advised to immediately exterminate them. Maggots and adult flies can be killed with the use of chemicals and over-the-counter pesticides that come in powder form or aerosol sprays. The use of fly traps, like flypaper and electronic bug zappers, also works fine for this purpose too.

It is also crucial to make sure that any and all edible food items remained covered and unexposed to keep flies from landing on ‘em, as well as to properly clean up after we’ve cooked and eaten to ensure that there are no food scraps left scattered around.

Make sure that your dining tables and countertops are well cleaned after use, and it is also advised to keep our toilets in tip-top hygiene to discourage flies from making it their next pit stop.

It is also a good idea to install insect-proof netting in and around your living spaces to prevent flies from entering.

Lastly, the public is encouraged to contact the health authorities to inform them of a sudden increase in fly numbers and to get rid of the insect’s breeding grounds.

Responsible for more than a million deaths around the world each and every year, the mosquito is by far the deadliest animal on planet Earth by being the transmitters of killer diseases like dengue, chikungunya and malaria.

Now we all know that mosquitoes do bite, but it is only the female mosquito that does all the blood-sucking – to give themselves extra nutrients in order to breed and make eggs – and can transfer the germs that are inside their gut directly into our bloodstream when they do so.

And just like the fly, it only takes about a week for hundreds of mosquito larvae from a single parent to develop into full-grown adults that are ready to bite, breed and repeat the whole process.

It’s a common fact that exposure to mosquitoes can be a problem during times of natural disasters such as floods – when people are forced out of their homes and into temporary shelters that can at times leave them completely exposed to the elements and these little vampires.

Standing water left after heavy rains and floods are prime real estate for mosquitoes to breed and lay their eggs, and according to the World Health Organization, it can take between six to eight weeks for an outbreak of mosquito-borne diseases to become an epidemic in the wake of floods, if not properly contained by:

In most cases, flooding does not immediately result in an increase in mosquito populations. But as with most illnesses, prevention is better than a cure, thus it’s important to first stop mosquitoes from ever having a chance to build up their numbers.

The public is advised to keep areas in and around their living spaces free of any pooled or standing freshwater that’s left when floodwaters subside.

Make sure that there are no clogged drains, water-filled plant pots or pieces of garbage that are left around where water can collect, and it’s also advised to keep any filtered or unfiltered water that’s used for drinking and washing, like water tanks and even toilet bowls, covered up properly to keep these tiny killers from getting to ‘em.

2. Protect our own and commit mosquito genocide

In order to keep ourselves and loved ones safe from harm, it is always, always morally correct to engage in the first strike.

The public is advised to try and remain indoors during dawn and dusk when mosquitoes are most active and keep any doors and windows closed.

Putting on a strong coat of insect repellent on your exposed skin is also advisable besides having other insecticides like aerosol sprays and those electric or combustible mosquito repellent coils around to gas ‘em to heck. Pesticides can also be used at places where there’s standing water to kill mosquito larvae before they have the chance to develop into adults.

The use of insect netting is also greatly effective at keeping us safe from having mosquitoes sharing our personal spaces.

Lastly, it’s important to inform the health authorities when there is an incidence of mosquito-borne illnesses like dengue fever in your immediate vicinity so that they can try to remedy it before an outbreak occurs – usually by fogging the area with pesticides.