From one of the oldest mosques in Malaysia to some of the most unique architecture designs, Malaysia has its own list of beautiful mosques. 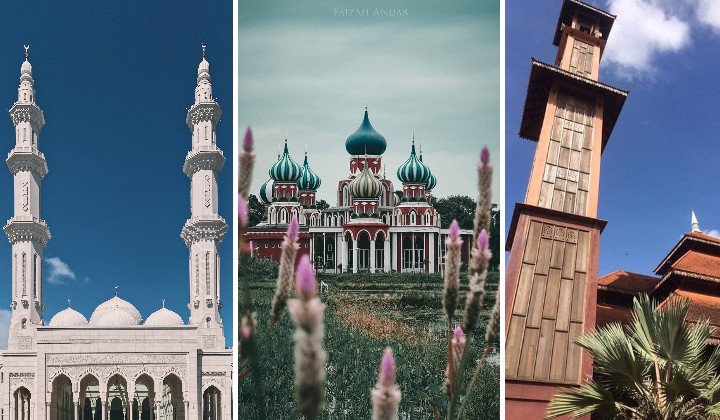 Being a country that’s heavily populated by Muslims, Malaysia has an abundance of mosques (masjid in Malay) all around. Some designs are influenced by our mixed races like Malay, Chinese and Indian roots. And some are modern ones with common but beautiful Islamic features.

Undoubtedly, there are a lot of modern and breathtaking mosques that are well known like the Pink Putra Mosque in Putrajaya, the National Mosque in KL and the Crystal Mosque in Terengganu.

However, did you know that we have mosques made of purely wooden materials? What about the fact that we have our own mini Moscow’s Saint Basil’s Cathedral as a mosque here?

Here are some of the lesser-known mosques in Malaysia with unique and historical designs and backgrounds for you to discover.

This mosque is said to be one of the oldest mosques in Malaysia and there are many who claimed that this mosque is around 300-400 years. But no one really knows the exact year it was constructed.

This mosque was built in reference to the Demak mosque in Java as you can see some of the features are in resemblance. This building is unique because of its historical background and also the fact that no steel nails were used (instead, they used wooden or bamboo pegs) in the making of it.

This mosque was originally in Kampung Laut, Tumpat but after two major floods, the authorities thought it was wise to move it to Nilam Puri, Kota Bharu. However, it travelled back (with restorations) to its original place in Kampung Laut so that it can be technically recorded as a world heritage site under UNESCO.

Next to the Hang Jebat Stadium, this is the third Chinese mosque in Malaysia after the one Kelantan (Masjid Cina, Rantau Panjang) and Perak (Masjid Muhamadiah, Ipoh).

This Al-Muttaqin Chinese Mosque was developed by the Malacca Chinese Muslim Association (PERTIM) and has unique Chinese architecture with pagodas and Chinese calligraphy (which are inspired by the designs of several mosques in Beijing, Shanghai and Xian).

Located in a village in Jerteh and surrounded by vast paddy fields, this mosque is dubbed the Russian Mosque as the colourful domes and structure of the mosque resemble the ones from Saint Basil’s Cathedral in Moscow, Russia.

The idea was first proposed by Besut’s parliament member, Datuk Seri Idris Jusoh to restore the old and worn wooden mosque that was over 100 years old to a new one with a budget of RM4.5 million, as a result of combined donations from the public.

Ideally, this mosque attracted a lot of visitors near and far to pray in it as well as admire its distinctive architecture.

Also dubbed as the Taj Mahal of Malaysia, this mosque is also said to share some features with the Nabawi Mosque and mosques from the Ottoman empire.

Accommodating a max of 5,000 worshippers, this mosque took around RM100 million to build and it is a waqf (donation) from Tan Sri Abd Rashid Hussain, the founder of RHB Group (Fun Fact: Did you know that RHB stands for Rashid Hussain Berhad? TIL) to the Negeri Sembilan Islamic Council.

Undoubtedly, the main attraction of this mosque is its architecture and materials (some were even flown in from Egypt, Turkey, Dubai and Morocco) used in its construction.

Built-in 1933, this mosque was actually a gift given by the British government to the fifth Sultan of Selangor at the time, Sultan Alaeddin Suleiman Shah to commemorate Klang as the royal town of Selangor.

This mosque features architectural designs from Moorish, Neo-classical, Art Deco and also Islamic influences which makes it quite different and unique from other mosques in Malaysia.

Fun fact: This was actually Selangor’s state mosque before it changed to the Sultan Salahuddin Abdul Aziz Mosque (the blue with white striped dome mosque) in Shah Alam.

Inspired by the Kampung Laut Mosque in Kelantan, this mosque is created with no nails too using the traditional peg method to revive the traditional Malay vernacular characteristics and craftsmanship.

Also mainly made from woods like the Cengal timber, Nyatuh and Bala timbers, this mosque can fit up to 1500 people.

This mosque is adorned with masterful wood carving done by one of the famous wood carvers of Besut, Wan Mustafa Wan Su.

Built-in 1728 (also one of the oldest mosques in Melaka together with Kampung Hulu Mosque), this mosque used to be Malacca’s state mosque before it was changed to Al-Azim Mosque.

The architecture is a combination of Javanese (potong Demak), Chinese (pagoda) and also European (neo-classical) design which makes it so interesting and beautiful to witness.

It has undergone renovations and restorations countless times including the addition of the Chinese-style pagoda minaret.

Also inspired by the Malay craftmanship from Kampung Laut Mosque, this mosque was built in 2016 with a cost of nearly RM6 million. It was built to be a green (no aircond) and disabled-friendly mosque.

Apart from Malay and Islamic craftsmanship in this mosque, it also has hints of international architecture from five countries mainly Indonesia, India, Yemen, Turkey and Morocco.

It was a waqf by an anonymous person to the Kelantan Islamic Council and Malay Custom (MAIK) which wanted to replace the old and small mosque with a new one.

This musolla is considered one of the most aesthetic ones in KL as the building is built in the style of Tropical Brutalism, which is an architecture style where blocks of concrete are worked together with green plants.

Although technically this place isn’t a mosque, it identifies itself as a musolla (slightly different and smaller from a mosque). This place is actually an NGO (hence the name Yayasan or foundation) aimed to carry out Islamic dakwah (preaching) activities through Islamic knowledge classes (majlis ilmu) and also aimed at helping the less unfortunate communities. You can call this a religious community centre we guess?

Even though it has lots of holes in it, some people said that this place is actually very clean, comfortable and of course, pleasing to the eyes.

Here are some other honourable mentions that can make our jaw drop at their unique, historical and beautiful details.

So, those are some of the places that have mesmerizing mosques you might not have heard or seen of.

For Muslims, pay a visit to these mosques and perform your prayers with peace and serenity while taking in the breathtaking architectural details.

For others, do visit these places too just for travelling fun and extra knowledge. But do remember to wear appropriate clothing and request permission first from whoever’s in charge.

We live in a multiracial and multi-religion country, so let’s respect each other’s perspective and fill up some knowledge about each other’s religion as well.