Christianity is the second largest religion in Malaysia. 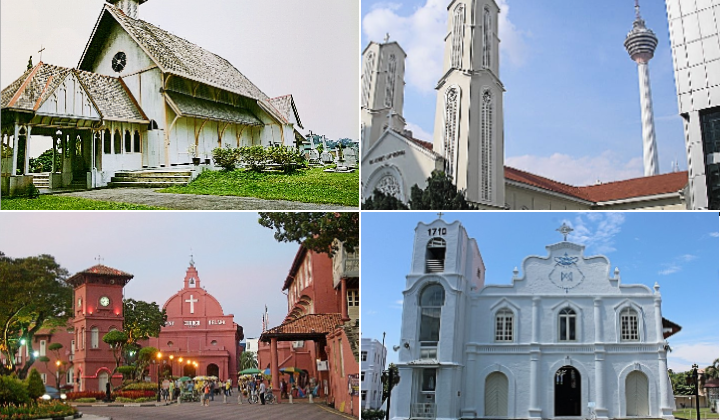 Christianity is the largest religious group on the planet with over two billion followers believing in the life and teachings of Jesus Christ and the sacred Bible text. Among the biggest groups of Christians are the Roman Catholics, Eastern Orthodox and Protestants.

Christianity is said to have arrived in Malaysia in the 7th century, brought by Christian Persian traders. The religion later grew with the coming of Portuguese, Dutch and British colonizers between the 16th and 19th century.

Throughout the centuries, many spectacular churches, chapels, cathedrals and minor basilicas have been constructed across the country as symbols of faith and places for worshipers to congregate.

Here are some of the oldest and often historic Christian religious buildings across the country;

It was originally a chapel built by the Portuguese in 1521 and had several names throughout the years like “Our Lady of the Hill” and the “Church of the Mother of God”. When the Dutch came to Melaka in the 1600s, the building was renamed as the St. Paul’s Church.

The church had also been the temporary burial site of St. Francis Xavier, whose armless statue still stands on top of the hill till this day.

Ermida De Rosario or the Rosary Chapel is a ruin near the Melaka River which once stood in the 1700s. It was itself built by the Dutch on the ruins of the much older, Portuguese Church of St Lawrence in which was there in the 1600s.

In 2019, worshipers celebrated Mass at the historic site for the first time in centuries.

With its construction finished at around 1710, the St. Peter’s Church in Melaka is the oldest, still functioning, Roman Catholic church in the country. It was also believed to be one of 14 churches that were available to some 7,400 Christians living in Melaka in the 1600s.

One of the church’s bells was cast in Goa, India in 1608 and was thought to have been salvaged from the ruins of the old Portuguese Church of St Lawrence.

Standing as one of Melaka’s signature historical structures, the Christ Church was completed in 1753 and is the oldest functioning Protestant church in the country. It was built by the Dutch to celebrate their colonial takeover from the Portuguese.

It was originally white in colour but that was later changed to its iconic brick-red in 1911.

Church of the Assumption, Penang

Completed in 1861, Church of the Assumption is recorded as the first church built by the British on the island. The church was said to have been founded by Francis Light himself.

The All Saints Church, in Taiping, Perak was the first church built in the Federated Malay States (FMS) – a government founded by the British – in 1887. The church’s aesthetics which exhibits gothic architecture is said to have remained largely unchanged since then.

The St. Michael’s church in Sandakan is known to be the oldest stone church in the state. The church was built in 1893 and took almost 20 years to complete.

Made from ironwood as well as stone bricks, the church survived a fire caused by bombings in Sabah during World War II.

What was originally a wooden structure in 1849, the St. Thomas’s Cathedral in Kuching was completed in 1954 and was the site of one of the first Christian missionaries in Borneo.

The land that the church stands on was noted to have been given by Rajah James Brooke.

Take a quick listen at the church’s angelic choir.

The Cathedral of St John The Evangelist at Bukit Nanas, KL was founded in 1883. The building is said to have been constructed with the help of a Chinese “towkay” named Goh Ah Ngee, a miner who lived in Kajang, Selangor.

The church is also now used as a community center for residence in the area.