The 1972 Kuala Lumpur Floods devastated the Klang Valley and also led to the creation of the KL Flood Mitigation Program. 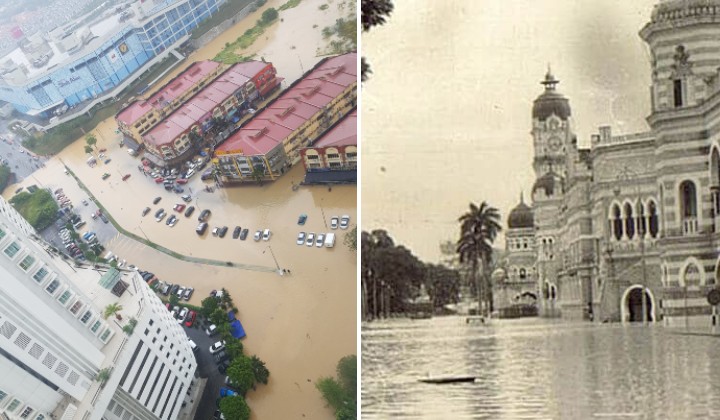 When Malaysia was treated to a weekend of non-stop heavy rain, many areas in the Klang Valley experienced devastating floods that swept away cars, people, and even entire houses.

READ MORE: 50-Year-Old Ancestral Home Swept Away By Flood: Only The Staircase Remains

The non-stop rain is an effect of the monsoon season, but this year’s rain was uncharacteristically heavy and long, which led to floods. In fact, part of Indonesia and Thailand are also experiencing floods at the same time.

However, it’s not actually the first time that such devastating floods have hit Malaysia’s West coast.

In 1972, most of Kuala Lumpur was underwater in a major flash flood, also due to the monsoon rains. The raining began the day after Christmas, 26 December 1970, and continued until 5 January 1971– more than a week of constant raining.

A total of 180,000 people were displaced in the flood with 32 fatalities. The total record was more than RM85 million in damages. In fact, it was so bad, then-Prime Minister Tun Abdul Razak declared a state of national disaster in West Malaysia.

Later on, in the wake of its devastation, the government set up the Kuala Lumpur Flood Mitigation Programme, which included additional reinforcement of rivers within the urban center, flood forecast and warning system, as well as the construction of the SMART Tunnel.

The thing is, while the 1971 Kuala Lumpur floods was the worst major flash flood in modern history, it wasn’t the only one either.

Nearly a full decade ago, researchers and scientists have already warned against the impact of rapid urbanisation.

In fact, this research paper critisises the British colonial government for their limited hydraulic management, which amplified the damage and impact of the heavy monsoon rain, especially in light of their rapid development of commercial industry and agriculture.

Even though 2021 isn’t the worst flood the country has faced, Malaysians are still reeling from the damage it has caused. People have lost homes, cars, but worst of all– lives.

While it seems like the worst of the flood has passed, the hard part comes after the devastation as people try to return to their damaged homes.

The question is, will we be prepared for yet another Great Flood, whether that will be next year, or another 50 years later?

Segamat And Tangkak Locals Evacuated To Shelters Due To Floods