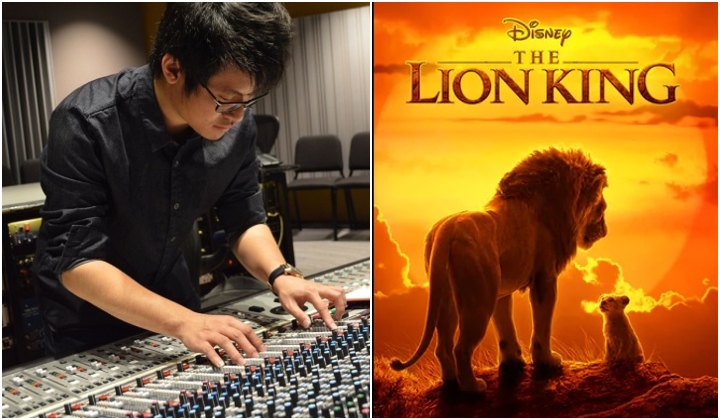 It’s no secret that Malaysia has some pretty talented people who’ve made waves internationally, like Yew Ping Soo -the 29-year-old musician from Ampang has been making his mark in Hollywood since 2015.

You might have heard his audio production and sound engineering work in the cinemas as the Yew has worked on the music for quite a number of notable Hollywood productions like the Lion King, X-Men: Dark Phoenix, Ralph Breaks the Internet, Aquaman and Solo: A Star Wars Story.

In fact his music work for Solo: A Star Wars Story makes him the first Malaysian to be involved in the Star Wars movie franchise.

Not only that, the graduate of the prestigious Berklee College of Music has also worked with some of the industry’s best music engineers and composers, from the likes of Hans Zimmer and Alan Meyerson to Shawn Murphy, Stephen Lipson, John Powell and Germaine Franco.

Under Hans Zimmer’s Production Studio as an assistant engineer, Yew worked on X-Men: Dark Phoenix and the Lion King.

He told Bernama that his break came at the end of 2015, when he got to intern as a studio assistant at Heitor Pereira’s studio. There he helped with the production of Angry Birds and Despicable Me 3.

This experience then opened doors for him to work with renowned Hollywood composer John Powell (composer behind the music of Kung Fu Panda and How To Train Your Dragon) as a Score Production Assistant. This is when he got involved with the production of Solo: A Star Wars Story in 2017.

He also told Bernama that his interest in creating music began as a curiosity when a younger Yew would listen to music while doing homework. Often, he would stop to ponder how the music he listened to was created.

I wondered how music was produced, recorded and mixed. I was especially curious about how music for video games and films were recorded as they usually involved an orchestra consisting of 56 to 90 musicians. That was the moment that led me to choose (a career in) music production and engineering.

Well, it seems that his curiosity has borne fruit as seen in his impressive resume. Not only that, Yew is currently working on the Star Wars Jedi: Fallen Order video game.

As for the future, Yew mentions that he would like to help the Malaysian music and film industry to help it reach international standards. In the meantime, we can surely expect great things from this talented young man!