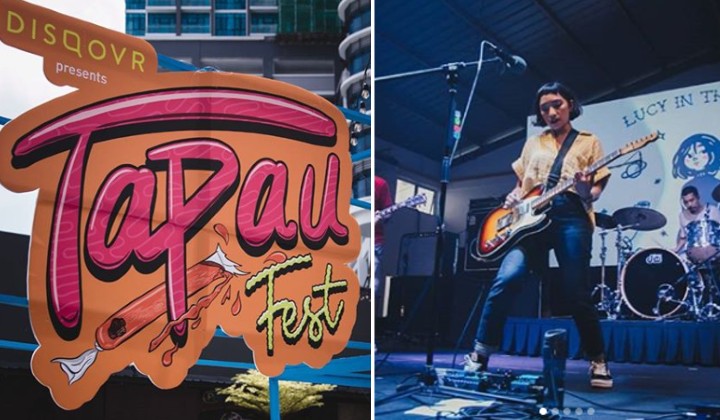 Presumably named after the concept of â€œtapauâ€-ing(read: dominating) all things local, this festival is a platform for independent bands and entrepreneurs to shine.

Having partnered with the likes of Disqovr, Vans, Snek, Gasket Alley, Rakita, Marshall, and Yoodo, the festival tickets this year were selling like hot pisang gorengs!

These were the 5 concurrent sections youâ€™ve missed if you werenâ€™t there:

Seats were arranged cinema-style facing a big screen installed on the wall. This was where visitors caught screenings of independent documentaries, music video premieres, and even local movies like Kami and Sepet. In between these screenings were mini e-sport tournaments.

Lucy In The Loo even made a one-night only comeback exclusively for Tapau Fest!

Even though the stage was located down the unsheltered slope (separated from the other sections), you could still see visitors crossing over in the rain to catch their favourite acts. Talk about having true indie spirit!

After all that moshing at Pentas, visitors indulged in local treats sold by a row of vendors. Contrary to popular belief, the nasi lemak, cendol, fried food and desserts were literally the price of ordinary roadside warungs!

Halfway through the event, it started pouring on the outdoor seating. However, ample seating in the roofed areas managed to spare the visitors from getting wet.

Nothing gets more Malaysian than enjoying your food whilst watching your favourite bands or screenings!

Early birds do catch the worms. The workshops began as early as 10am, starting with music home recording 101 by Jemson, followed by Kide Baharudinâ€™s self-explanatory Dari Hobi Ke Kerjaya (From Hobby to Career) and ended with Bikin Filem Pertama (Make Your First Film) championed by Nik Amir, Razzaisyam and Nadiah Hamzah.

This was where band merch and local independent goods were sold.

Unlike its name, Pasar was actually a row of well-organised booths situated in between instagrammable photo spots. In fact, the entire venue, from the hallways, to the alleys, were designed to be the perfect background for your OOTDs!

The turn ups were incredible. Despite the rain, people were still queuing up to buy food and crossing over to the Pentas section to catch their favourite bands in action.

All in all, it was rather exciting to learn new things while exploring the local art scene. We hope there’s going to be more festivals like this to put our local independent brands in the limelight!