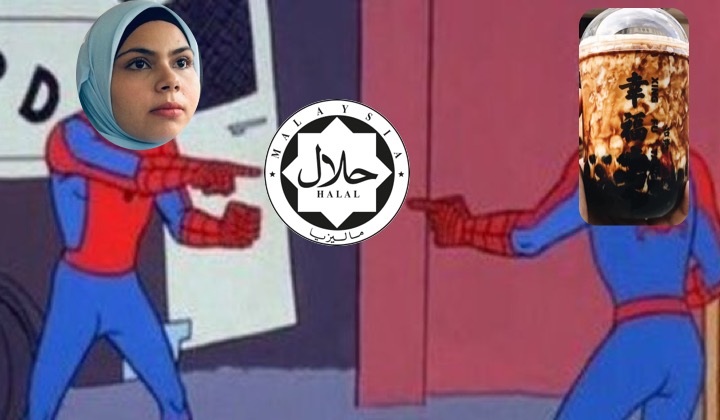 She brought up the question of whether or not the drinks were considered halal, stating that she felt doubtful about trying the drinks as they were not halal-certified, plus the shop name and writings were all in Chinese.

She urged her fellow Muslims to not join the hype just because artists and the Insta-famous drink bubble tea. Instead, she cautioned that non-halal is not limited to pork, but has numerous other requirements that popular bubble tea shops allegedly may not fulfill.

Of course, netizens are divided.

Some found her concerns overbearing, claiming that the drinks, being vegetarian, wouldn’t require halal-certification as there is no animal products involved.

Others seemed to not be bothered, saying that less people would result in shorter lines.

However, since then, Siti Mariam Zainon has been repeatedly asked to produce the halal-certification for the food she prepares, which she has yet to provide for her Arabic cuisine catering service.

In a follow-up post, she clarifies that such concerns should only be pertinent to the Muslim community. She also expresses dissatisfaction that non-Muslims and young people are chiming in on this matter.

She goes on to say that while the popular drinks may seem like a simple issue, it is more of a concern for mothers of children to feel comforted with a halal-certification.

In Malaysia, Halal certification is a reassurance that the Halal concept is well maintained and monitored; A green light provided by JAKIM and JAIS. This does not necessarily mean that non-certified foods or drinks are not Halal.

For additional reference, the Qur’an and Hadith relate to the issue of Halal as such:

He only prohibited for you carrion, blood, the flesh of the pig and what was dedicated to other than God, but if one is forced out of necessity rather than desire or greed, then he incurs no sin. God is Forgiver, Merciful.

Based on the above, in Malaysia at least, when we do not have a reliable and relevant evidence to consider something Haram, then that thing is probably Halal.

Since most of the bubble tea chains do not sell meat and are in the process of applying for their Halal-certification, it’s pretty safe to say that the non-Halal fear-mongering is probably unfounded.

So perhaps we should all remember the Golden Rule: