Puteri Zaleha had a dream that Teluk Intan will be devastated by flood and the ritual will prevent that from happening. 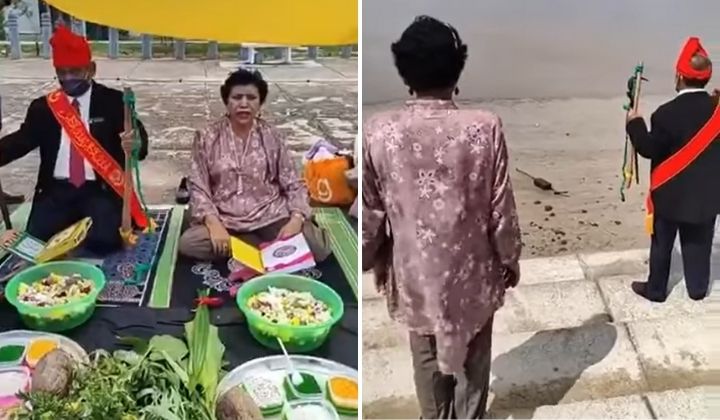 Raja Bomoh (real name Ibrahim Mat Zin) is infamous for his rituals. In 2014, he performed a ‘ritual’ to find the missing flight MH370 using coconuts.

According to Today Online, Raja Bomoh apologised for his antics during a press conference in 2017 and said it was all an act as instructed by someone whose identity he wouldn’t disclose.

Despite the public apology, he has kept up with his antics and tried to shield Malaysia and the world from the Covid-19 pandemic in 2020.

READ MORE: Raja Bomoh Is Back To “Shield” Malaysia And The World From COVID-19

His latest ‘ritual’ is to prevent Teluk Intan from being flooded. This time, he had extra help from a woman named Puteri Zaleha.

Puteri Zaleha shared that she had a dream depicting a bad flood in Teluk Intan and the ritual used are not magic but tips from ancient times.

The ritual using ingredients such as turmeric, flowers, rice and plants was done to protect Teluk Intan and other areas in Perak from floodwaters.

The ingredients were then pushed into the water in hopes to make the flood water go away.

There was also a book that looked like a copy of the Quran in front of them.

According to Astro Awani, Puteri Zaleha could be heard singing some lines from the Mayang Sari song.

The ritual I made today were tips from the ancient times. We pray to God and ask for Teluk Intan to be safe from the flood, and with His permission, the flood water will recede.

“Don’t be influenced by them”

Perak Islamic Religion Department (JAIPk) director Datuk Mohd Yusop Husin said that the department would open an investigation paper on the issue according to Section 14 of the Perak Syariah Criminal Enactment 1992 for denigrating and insulting the religion of Islam.

People are advised not to be influenced by such acts and to stay away from any practices that lead to superstition.

They have gazetted a fatwa on banning the rituals and practices which are deemed blasphemous in accordance with Section 36 and Section 37 of the Administration of the Religion of Islam (Perak) Enactment 2004 in 2015.

He added that Muslims in the state who disobeyed the fatwa could be prosecuted under the law enforced in Perak.

Muslims in the state are also prohibited from spreading any activities related to Raja Bomoh in the form of pamphlets, social media, audio recordings or films.

This includes spreading, supporting and promoting Raja Bomoh’s ideology and attending any ceremony or events directly or indirectly.