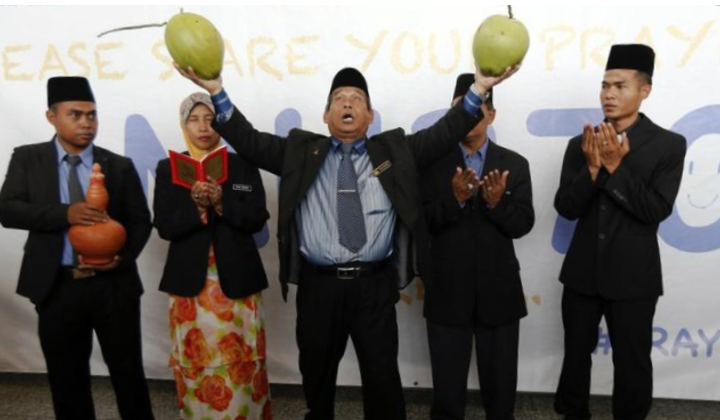 After being away from the spotlight for a few years, Datuk Ibrahim Mat Zain aka Raja Bomoh is back and claimed that he has made a protective barrier that will save Malaysia and the world from the threat of COVID-19.

Recently a video of him sporting a sweet new mustache was uploaded online conducting the ritual in front of a desk globe along with a set of ritual tools as he chanted prayers to ward off the deadly coronavirus.

He said it was done based on the requests of his “bomoh” friends worldwide who contacted him via telephone as they’re afraid that their countries would be affected by the disease.

Seeing that the situation has worsened, I decided to cooperate.

Raja Bomoh and his ‘stach starts off the video by scanning the globe with his “telescope” that he said was passed down from generations before saying a prayer and performing the ritual.

In between the prayer, he even had a public service announcement advising Malaysians to work together to combat the spread of COVID-19 by practicing good personal hygiene and not going out unless necessary.

Raja Bomoh also reminded people to wash their mouths, nostrils, earlobes and also face besides washing their hands before coming inside the house if they have to go out.

To end the video, he even asked the government to give some relief to the self-employed and those who have their own businesses as their income is affected by the virus.

This is not the first time he tried to use supernatural means to help solve Malaysia’s problems.

In 2014, he conducted rituals at Kuala Lumpur International Airport along with his trusty helpers, coconuts and “magic carpet“, to help find MH370 when the plane was reported missing.

His “unconventional” methods not only caught the attention of the local media, but also international outlets including the BBC and the Washington Post.

Datuk Ibrahim Mat Zain even thought about running for Bagan Datuk’s Parliamentary seat during the last General Election as well, as an independent candidate but didn’t turn up to submit his nomination form.

He once admitted that his rituals was un-Islamic and claimed that he would repent besides signalling to denounce his “Raja Bomoh” title.

But it seems old habits are hard to break.