A stolen meal made a security guard and a monkey in Langkawi a viral sensation overnight and media outlets are forking out money for the clip. 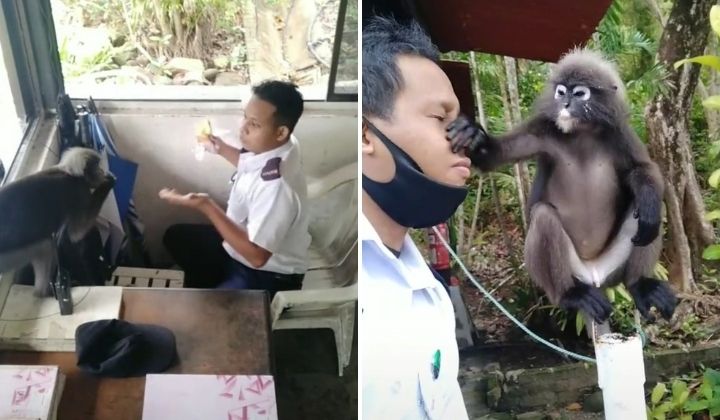 A security guard’s hilarious encounter with a monkey at a resort in Langkawi, Kedah became so viral that media companies from Los Angeles and Singapore wanted to buy the clip from him.

In the video, Muhamad Hafiidz Hamzah was eating bread possibly during lunchtime before a monkey came into his guardhouse.

Shocked by the primates sudden appearance, Hafiidz quickly gave the monkey a small piece of bread to distract it and managed to quickly grab a mouthful himself before the monkey snatched the rest of the food.

Seeing that his meal was gone, Hafiidz let out a groan. The clip gained 7 million views at the time of writing.

The 25-year-old from Kuala Perlis said the monkey named Lisa has been around Berjaya Langkawi Resort since he started working there three years ago.

He did not expect the clip that was captured by a closed-circuit television camera would go viral.

Sharing his personal experience, Hafiidz revealed that he was first shocked to see the monkeys at the resort when he started working.

According to mstar, Hafiidz said he’s used to be around the monkeys in the area now.

They are tame. The resort area used to be their habitat. When the resort was built, they ran away from the area. But when tourists started to feed them, they returned and stayed on.

Every morning, Hafiidz and his colleagues will feed the monkeys with bread so that the primates will not venture into the resort’s restaurants.

He soon found out that these monkeys can recognize the people who love to feed them.

Each time he wants to eat, he’ll have to find a hidden place away from the monkeys in order to eat in peace.

After the first clip went viral, netizens asked for more videos of Lisa and Hafiidz delivered on his Tiktok account.

However, he also reminded viewers that the videos will also depend on when he’s available to film the videos because he’s working too.

Thanks to his popular clip, Hafiidz said many people including local actor Shuib Sepahtu’s family and his personal assistant came to visit the resort and asked if he was the guard with the monkey.

Monkeys are not pets

While the viral clip ended on a funny note, it’s not advisable to feed the monkeys and other wild animals even if you’re guests of the hotel.

Feeding wild animals is not only dangerous to humans but to the animals too.

According to a study by the University of Roehampton in London, wild monkeys fed by tourists in Morocco suffered poorer quality fur, higher stress hormones and various illnesses.

The monkeys shown in Hafiidz other videos may seem friendly but it’s also important to note that they are still not suitable as pets.

Back in June 2021, netizens were outraged when a video supposedly showed a baby Dusky leaf monkey getting shipped to a new owner in a box.