The Lontong is an endangered and protected species in Malaysia. 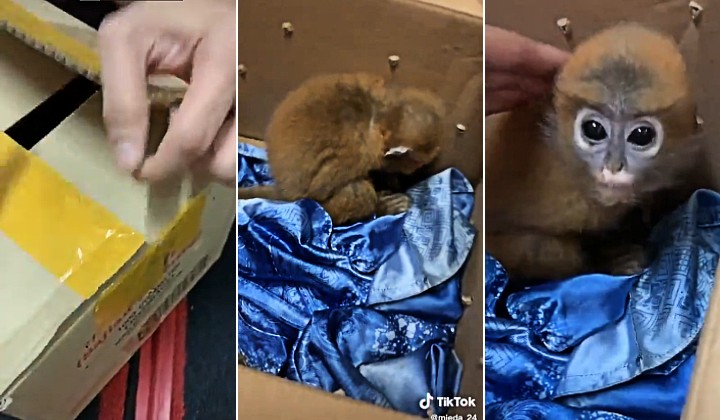 Malaysians were beyond outraged when footage of a baby monkey which was supposedly shipped to its new owner in a box was shared on social media.

Twitter user @___nnik brought netizens attention to a disturbing video uploaded on TikTok by a woman named Mieda Marsha which apparently showed her unpacking a cardboard box which contained an infant Dusky Leaf Monkey trapped inside.

The 25-second clip had witnessed the terrified looking creature being unboxed from its inhumane confinement – which was nothing more than a box with holes punched into it and a dirty old rag – to the sound of a woman making baby noises.

“Cak! Hey! Hey! I’m a bit squeamish too,” said a lady’s voice in the video, greeting her new pet.

A screenshot of the woman’s page later showed the monkey dressed in a diaper and feeding on what appears to be a bottle of milk.

Checks later found that the TikTok account @mieda_24, where the clip had originally been shared, was now unavailable.

Apparently, netizens who took the effort to contact the woman before her social media accounts went dark revealed that the video was supposedly taken two years ago and claimed that the animal had been released back into the wild.

Comments online had Malaysians collectively expressing their horror and disgust with how the living animal had been treated.

the monkey pass the point of prison break, just sitting the even the box already opened traumatize, trapped in a box with little to none food or water and possibly rough journey and hot weather in delivery van

I hope there is justice for this little fella

People also highlighted the insidious practice where baby monkeys are poached from the wilds and taken away from their mothers in order to cater the exotic pet market.

The process of capturing these primates is inhuman to begin with. Primates by nature are similar to us which means they live in groups/ families. Hence, to capture 1 baby means that their family will be killed. This act needs to be stopped! Join us voicing for #freeprimates pic.twitter.com/jrnrdSHgqV

Some also make note of how these exotic animals can easily be purchased simply on social media.

Primates are not pets

The Dusky Langur a.k.a the Dusky Leaf Monkey or Lotong as they are known locally is a species of primates endemic only to Malaysia, Thailand and Myanmar.

Here in Malaysia, lontongs can be found in the Peninsular regions of Perlis, Penang, Langkawi as well as in the Perhentian Islands of Terengganu, where they make the jungles their home.

Due to habitat loss, lotongs are also found close to humans – living in patches of urban forests as well as plantations.

Like all primates (which includes us humans), lotongs are highly social creatures – with family groups of up to 20 individuals and spend most of their time up in the trees feeding on plants, fruits and flowers.

They are known as the ‘gardeners of the forests‘ where they maintain and rejuvenate the ecosystem by spreading plant seeds as they forage, eat and poop.

There are exactly seven different sub-species of the monkey – each possessing slightly unique colours.

Newborn lotongs are coated in bright orange or yellow fur that almost gives them a golden appearance and can live to reach between 15 to 25 years of age.

The lontong is classified as an endangered species by the International Union for Conservation of Nature (IUCN) Red List of Threatened Species and are a protected species in Malaysia.

However, this hasn’t stopped humans from either encroaching on their habitats for development and agriculture or illegally poaching them for the exotic wildlife trade.

A 2019 report by the Wildlife Trade Monitoring Network or TRAFFIC named Malaysia as a hub for the illegal trafficking of wildlife across Southeast Asia and the world with contraband easily being moved through our airports.