The account name was changed to Shib and the profile picture was replaced with an image of the SHIB coin logo. 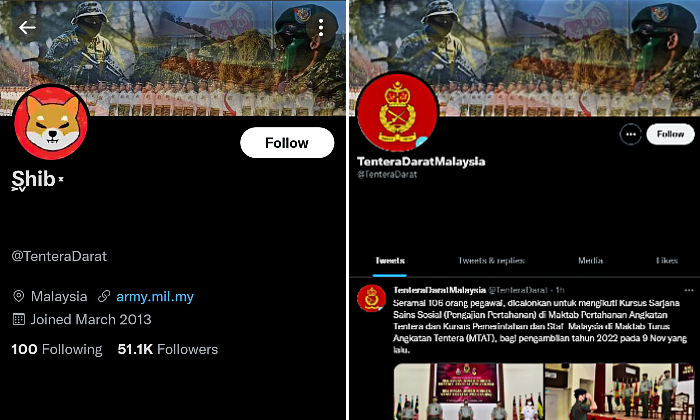 The incident was noticed by netizens who saw something strange going on with the @TenteraDarat official handle when its name was changed to “Shib” and its profile picture was replaced by an image of the Shiba Inu or the ‘SHIB coin’ cryptocurrency logo in the shape of a dog.

A posting was also made on the account, tagging the Twitter handle for CoinMarketCap – an online price tracking site for crypto assets.

As of this morning, the army’s Twitter account was back to normal. However, that didn’t stop Malaysians from engaging in some spirited trolling themselves.

Besides being amused, people had questions for the Defence Ministry on the breach of one of their official social media channels.

Last September, Chief of the Malaysian Defence Force (CDF) General Tan Sri Affendi Buang denied allegations of a security breach within the Malaysian Armed Forces (ATM) when it was reported that around 1.4 million local company profiles were stolen from the Companies Commission of Malaysia (SSM) database and sold online.

News headlines from 2020 also saw sensitive data belonging to the Malaysian Navy (TLDM) being leaked onto the Dark Web.