That being said, Mahiaddin, aka Muhyiddin Yassin, isn’t quite done with being Prime Minister yet as he’s currently the Caretaker PM and there’s no one replacing him so far. 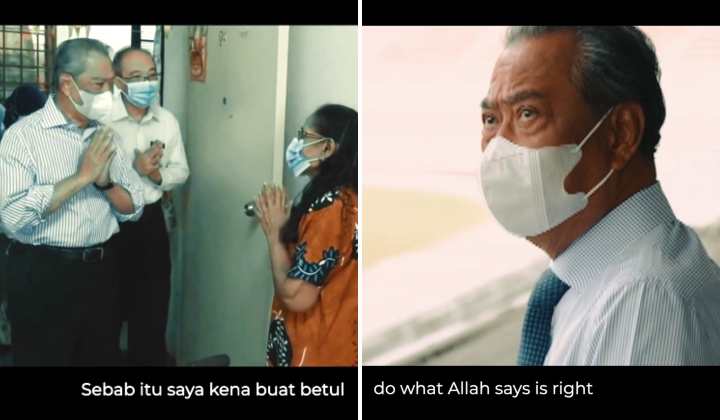 Tan Sri Mahiaddin Md Yasin, also known as Muhyiddin Yassin, had one of the most colourful tenures as Prime Minister of Malaysia, despite holding the position for only 17 months– the shortest tenure in our history.

Here are just some of the most memorable:

1. Took the spot when Mahathir resigned

2. He came in with the largest cabinet ever

Mahiaddin Yasin also changed up the cabinet, which featured a completely revolutionary structure to the country’s executive government with the appointment of 4 “senior ministers” instead of a deputy prime minister. He ended up with the largest cabinet in Malaysian history.

In May 2021, during an interview with Bernama TV and RTM, Mahiaddin asked the interviewers if they had been vaccinated. When they said they had not, he said he had received two jabs.

Some Malaysians took offence to the statement, saying it was tone deaf as at the time, many Malaysians had yet to receive even one dose of the vaccine.

However, it should be noted that Muhyiddin was the first person in the country to get vaccinated, and did so publicly in order to reassure the public that vaccines are safe.

It may still surprise some that ‘Muhyiddin Yassin’ is not the official name of the 8th Prime Minister. Instead, his official name is Mahiaddin Yasin.

This follows the case where a legal order was overturned in June 2021 by the Shah Alam court because it was signed Muhyiddin Yassin, therefore setting the precedent that for all legal matters, the real legal name must be used.

It turns out that for about a year, everyone had only known him by his chosen name!

Mahiaddin also suffers from a history of cancer, and when he was admitted into the hospital at the end of June, there were fears that his health had deteriorated.

He later put those fears to rest with a public statement saying that he only had a case of overnight diarrhea.

Naturally, as is human nature, Malaysians have never given up a chance to make poop jokes. Legends say that we are still making poop jokes until today.

READ MORE: Prime Minister Still In Hospital, Not Because Of Tumor

While he is fond of waving to crowds as he gets out of cars, Mahiaddin is quite camera-shy.

Unlike his predecessor, Mahiaddin has avoided live television or press conferences, even going so far as to ask that a broadcast of his parting words with some editors on the day of his resignation be cut-off midstream.

“I thought it should be just with the editors, why should it be live? Cannot be live because I’ve just delivered my keynote. Recording bolehlah, but not live,” caretaker PM Muhyiddin Yassin was heard saying to his aides before the presser. pic.twitter.com/EaSdpu22HB

Although he and his cabinet have formally resigned, Mahiaddin Yasin has been appointed as our Caretaker PM for the time being until another Prime Minister can be elected through a general election, once the country’s Covid-19 crisis has settled down.

However, in his farewell speech, Mahiaddin did apologise for his shortcomings, pointing out that these were difficult times, and thanking frontliners for their efforts at the same time.

An hour after he announced his resignation, a farewell video appeared on his social media pages. You can check that out below.

Muhyiddin Has Been Appointed The National Recovery Council Chairman