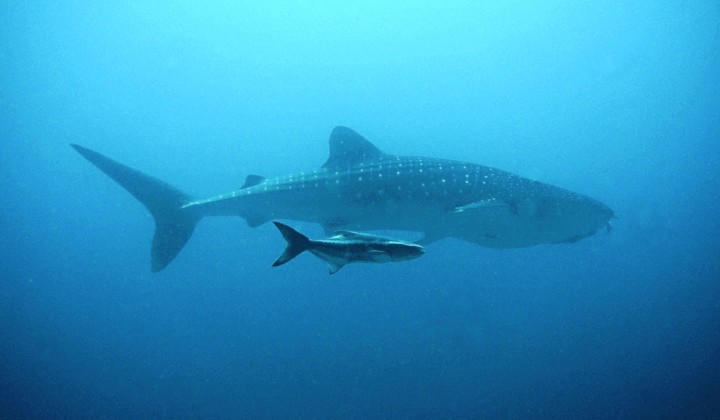 A couple months ago, a dead whale shark was found in the waters of Tanjung Tohor, Johor.

While Malaysians were excited by the rare sight of the animal in our waters, we were also saddened by the fact that the majestic animal had died here.

Two months later, another whale shark has been spotted!

But this time around is cause for celebration as the animal was seen alive and swimming with a baby in tow!

The video of the whale shark and its apparent baby was posted by Twitter user @vamos32 who is an ROV pilot, according to his Twitter bio.

FYI, ROV stands for Remotely Operated Vehicle, an unoccupied underwater robot used to explore the ocean while being operated by a person at the waterâ€™s surface.

“Serious question! Weren’t you guys afraid seeing such a huge shark underwater?”
“We were chill because we were controlling from above the water. The only thing thing that was underwater was our ROV.”

Based on his tweets, we gathered that @vamos32, who works offshore, was operating the ROV somewhere in the South China Sea between Peninsular Malaysia and Borneo when he had to suddenly bring it to a halt because their sonar radar detected a whale shark and its baby passing by in front of them.

“Where is this, bro?”
“In the South China Sea between Peninsular Malaysia and Borneo”

Malaysians were understandably amazed by the sighting, pointing out how lucky @vamos32 is for spotting the whale shark and baby considering the fact that even scientists have had trouble understanding the species due to how rare it is to find them in the wild.

The baby so smoll omg

“So lucky! Others pay thousands for such a view!”

“Wow! With its baby some more!”

Besides the video, there, unfortunately, isnâ€™t much known about the whale sharks sighted.

“Can you tell me the rough size of the whale shark you saw?”
“I couldn’t really tell because it sighting was so short. But so far, this is the biggest one we’ve spotted.”

Either way, weâ€™re totally amazed and hope the whale shark and its baby are healthy, happy and live a long safe life!

To find out more about whale sharks, we wrote about that here!