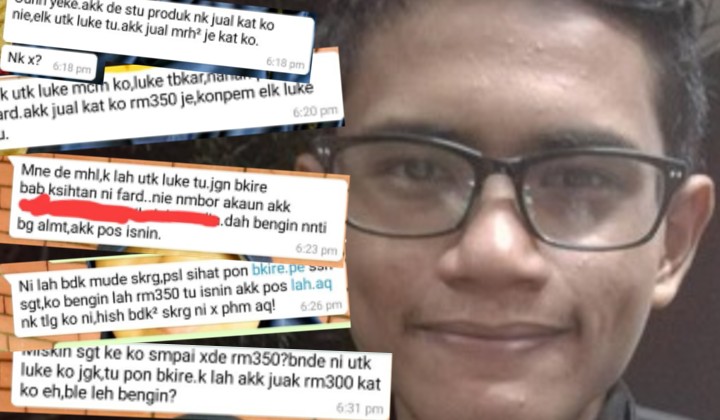 Meet 24 year-old Muhammad Fadhil Osman, who fell off his bike on Thursday and scraped himself up really badly.

He posted about his injuries on Facebook and then received a WhatsApp message from a ‘concerned woman’. His post about THOSE MESSAGES went viral.

It starts off innocent enough with her asking about his accident and his injuries.

He replies that he’s just missing some skin and his flesh is still there but by her third message, she’s pushing for a sale.

She says the medicine she’s selling costs RM350 to which he says he can’t afford it and politely declines.

But she’s not taking no far an answer.

Insisting the medicine isn’t expensive, she tells him not to be cheap when it comes to health issues.

She then sends him her account details, instructing him to bank the money in so she can post the medicine on Monday. He declines again and wishes her good luck in finding customers elsewhere.

But this saleswoman won’t be deterred so easily. Latching onto his age, she says she doesn’t understand why youths nowadays are so cheap and repeats her instructions to bank in the money.

In return, Fadhil starts teasing her a little bit, saying he doesn’t understand why old people are so pushy and again declines. Adjusting her position, she asks him why he’s so poor that he can’t afford RM350 for medicine. Graciously, she knocks down the price to RM300.

(Possibly “When can you bank-in?” but we’re not sure.)

Fadhil says he’s still too poor to buy her medicine and if he had the money, he’d rather buy Baju Raya for his younger siblings, but she can bank-in her arrogance and let it collect interest for her children.

She changes tactics again, Fadhil. She’s much older and more experienced than you. She’s tasted more salt. Young people today are so hard to talk to!

Fadhil says too much salt will give you high blood pressure.

Then he takes a bold move. Let’s see how it plays out…

Fadhil bought his own medicine and it only cost RM58 but even then he had to scrape around his piggybank.

She’s not happy. She says if he dies from using that medicine, she’s not going to pray for him at his funeral.

Fadhil says he wouldn’t invite her because, frankly, he doesn’t even know who she is.

So she sends him some delightful emojis in reply.

Fadhil is now rich with thousands of friend requests which he says he may or may not approve because he’s afraid they’ll try and sell him something.