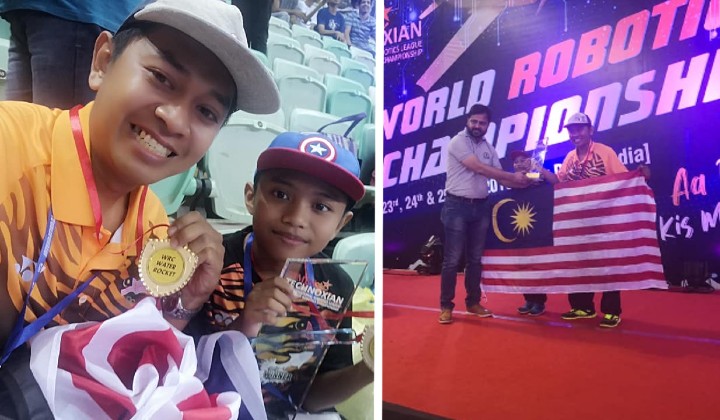 In the latest episode of young Malaysians that bring honour to the country, 12-year-old Danish Irfan Muslim literally built a champion rocket.

The young student from SK Tun Hussein Onn participated in the World Robotics Championship held in India with his father Muslim Tamsir, who is a teacher at the school.

Danish, the winner of Malaysian water rocket championships in 2018 and 2019, took home first place at his first ever international event.

“India is our first international exposure. We made a good decision to participate in this event.”

Muslim, father and teammate of Danish, to Bernama

The father-son team beat 30 other teams comprised of students from secondary schools, colleges, and universities in the Water Rocket competition.

The 38-year-old Science and IT teacher said that all the materials used in the competition were brought over from Malaysia.

“We came to India to gain experience and play for fun. But having won the contest, we feel elated and proud as Malaysians. I am impressed with my son’s skills,”

The winning rocket was built, fixed, and launched ad-hoc, but surprisingly stayed in the air for the longest time at about 11 seconds.

Congratulations to Danish and Muslim for the fantastic effort on the world stage!

We Are All Makcik Kiah, And Her Family Is Our Family