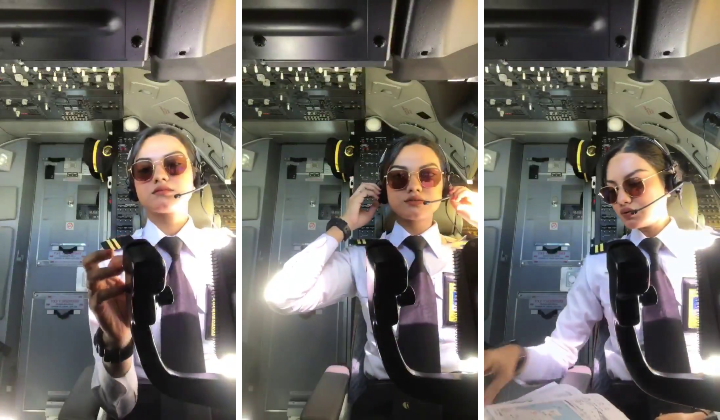 She’s a pilot and she’s flown right into the hearts of many these past few days after posting a video of herself listening to music at work.

Not just any type of music though, Khaysha posted a video of her listening to a genre of music known as rock-kapak.

In the 15-second video, Khaysha is seen fiddling around with the flight stick and her headset before pulling out a binder or manual, hopefully during pre-flight checks and with permission of the captian.

All the while, she mouths the words to the song.

The song in the video is Taman Rashidah Utama by Wings; a song written by lyricist Mohd Hakim “Bob” Lokman about falling in love with actress Siti Rohaida Mat Aris (Aida Aris) before she was famous.

However, Khaysha is already pretty famous on social media with 246,000 followers on her Instagram account and has done previous interviews with Berita Harian.

Anyway, the internet’s response? Well, there was a surprising amount of women professing girl-crushes, followed by the now standard “Mother, I would like to wed that woman” comments.

That is all. Enjoy spending the rest of the day either listening to rock kapak or stalking her on social media. We suggest the rock music because people gotta work.