The Middle Eastern dessert is super popular, and there are a few great ones right in the heart of Kuala Lumpur city. 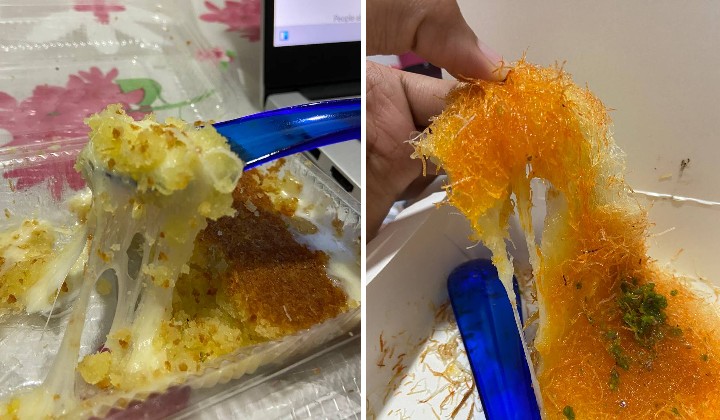 No kidding. When it came to viral stuff, we had to try it out whether it was worth it or not. It can sometimes be hyped for nothing, right? It’s ‘Cap or No Cap’ time.

But before that, what is Kunafa?

Also known as Konafeh or knafeh, it is a Middle Eastern dessert that’s made from layers of vermicelli-like pastry called kataifi, enclosing a soft cream-like pudding in the middle. The middle part can be in different flavours but the dominant ones are cream and cheese. The dish is then soaked in a sugary syrup called attar and topped with crushed pistachio nuts.

I’ve had cream kunafas before and to my Malaysian tongue, it tasted like a bland milk pudding wrapped in sweet soaked vermicelli. It’s a nice thing to try once in a while but I wouldn’t crave for it.

However, I have never tasted cheese kunafa before. The viral ones on social media looked so tempting with the stringy cheese and handsome Middle Eastern seller bright, bright colour.👀

This place went viral first because of its stringy cheese kunafa and also the dashing friendly (and generous!) seller.

It’s fairly easy to find this place in Pavilion KL. Just go to the food court section called Food Republic and find a section with the name Dubai. Whether it’s filled with people or not, it’s based on luck. I got there on a public holiday at 4 pm and there was a line, but it was only a few people at the time.

The kunafa was out of stock at the moment and we had to wait for twenty minutes to get the next batch ready. But we paid for it first and at least got a seat somewhere while waiting. While lining up, the seller gave us free mini baklavas, which was quite good. Hey, at least he knows how to appease his customers.

The thick cheese kunafa here is cut into a rectangular shape and put into a plastic food container. It’s brown at the top and white in the middle. You can have it to go or have it there at the food court (I recommend having it there).

They have the cream kunafa (tastes like sweet wet vermicelli with pudding) and cheese kunafa. I tried both but of course, I like the cheese one better. I didn’t really taste much of the stringy pastry, just thick cheese and a soft nutty-like layer (like semolina) at the top.

The texture of the kunafa is soft and gooey. You have to eat this one with a spoon as the top layer crumbles easily. This cheese kunafa has a combination of rich, creamy, salty and sweet flavours.

Price: RM15 for a slice of cheese kunafa and RM12 for cream kunafa

This one is viral because of its bright orange colour, stringy cheese, honey ice cream and long long queue. I went to this place twice before and it was both a failed attempt. It’s either they’re out of kunafa or the line is too long.

They even had RELA officers to guard the queue, making sure there’s no line-jumping peeps. And don’t be confused, there’s only one line, not two – it’s just separated because there’s a road in the middle of the line.

You can find this place near McDonald’s Bukit Bintang and you’ll see a line of shops on the right. The lot is smushed in the midst of other Middle Eastern eateries and it is directly in front of Hong Leong bank.

On my third attempt, I got there at 4.20 pm on the same public holiday and stood in line for almost an hour! No kidding! If you’re keen to line up like me, do bring a drink or energy bar for fuel (or a portable fan too- I sweated like a pig).

This crisp cheese kunafa comes in a round shape and is put into a box together with the syrup, separately. It is bright orange in colour and a bit flat.

While it’s still warm, the kunafa really tasted crispy. It’s basically two crispy layers of vermicelli-pastry encoating a soft cream cheese filling. It’s quite hard and flat if you just have it without the syrup. With the sweet syrup, it makes the kunafa chewy enough.

Honestly I do not know why they bother giving a spoon as it’s quite hard to scoop it. They should’ve given a fork too.

They have two shops over there. Both are just a stone’s throw away from each other. The new branch (opened in early July) sells the same products except for the ice cream (only at their new branch). You can also dine in at the new branch (the current one is only for take-aways).

Apparently, you can order first online and pick it up later at the second branch (I did not know this fact at the time- do your research people!).

Price: RM18.90 for a piece of crisp cheese kunafa and RM12.90 for creamy kunafa slice

The one from Dubai is definitely heavier and creamier. There’s a lot more cheese in that one compared to Kunafa Crisp and you’ll get the ultimate cheese-pulling satisfaction from this one. If you love cheese, I would definitely recommend this one over the other.

The Kunafa Crisp is a bit hard and bland but if you put on the syrup while it’s warm, the saccharine and the saltiness of the cheese just mix perfectly! I smiled all the way while eating this.

Both should be eaten while they’re warm. For me, if they aren’t enjoyed warm, then you’d be eating regular salty pudding with dry vermicelli. It ruins the whole point of stringy cheese pulling viral-ness. So, if you take it home, reheat it in the microwave for a few seconds and you’ll definitely enjoy it better.

So, how about you? Tell us what you think if you’ve tasted both before.

Go All Out With A Majestic Deepavali Celebration At Pavilion KL