Tired of plain iced/hot Milo? Step up your game (and fiber intake) with added VEGETABLES. 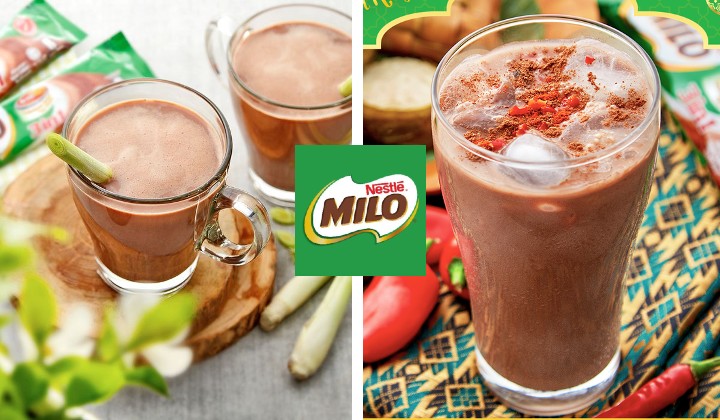 Mee-lo or Mai-lo? There has been quite a debate among Malaysians to figure out how to properly pronounce the popular chocolate malt drink.

But whatever we call it, we just can’t get enough of the drink that came all the way from Australia, now can we?

Our mamaks like to invent new drink recipes all the time, but it turns out that Milo itself has recipes with unconventional drink pairings.

They are around 46 different recipes to try out but we’ve highlighted some of the top creative ways you can prepare your next cup of Milo. Here are some of them:

Imagine Boost. But with Milo and Spinach. That’s about right.

We bet this is for those healthy green shake drinkers.

Spinach is known to be incorporated in green smoothies as they have a mild taste than kale or other green juices.

But some people would add other elements such as fruits like banana, apple, or strawberries to complement the green taste of spinach in their shakes.

Similarly in this Milo recipe, bananas are also added to the mix. Here are the full ingredients.

You blend these all out and serve. Fairly easy recipe to try.

Did you know that hot chocolate with chilli is a popular drink in Mexico? It’s called Xocolatl, an Aztec and Mayan hot chocolate delicacy.

This time around, Milo has tried pairing its chocolate malt drink with chillies, creating a spicy but creamy drink.

They may sound a bit peculiar but think of it as a peppermint or cinnamon hot chocolate. Sounds tempting.

The ingredients in the recipe are:

Put all the ingredients except ice cubes and garnishing into a pot and cook it until it simmers. Then fill a glass with ice and pour the Milo mixture.

You can also enjoy it hot like the Mexicans do.

Apparently, hot chocolate with turmeric is a healthy drink.

Tumeric is associated with anti-inflammatory benefits as well as strengthening the overall energy of the body.

Did you know that turmeric can also be infused into tea? They can also be made into a latte or any other creamy drink.

This time though, we’re infusing it into a chocolate malt drink. The orange zest will give off a nice citrusy flavor to the nice aromatic chocolate.

All of the ingredients should be put into a pot and boiled for three minutes. Then pour it into a cup and serve it while it’s hot.

However, one question still remains. Does it look chocolate or yellow in color?

Lemongrass usually goes best with teas. Especially if you add on mint or flavors like lime or lemon. It’s a very refreshing citrus drink.

Lemongrass is also packed with antioxidants and is used to help reduce PMS symptoms. It can also be used as an air freshener!

But lemongrass with Milo? Sounds a bit weird but it could work.

The ingredients are very simple to find and work with too.

Milo Malaysia recommends boiling the water with lemongrass for 10 minutes to get that aromatic flavor out. Then add in Milo and stir.

Serve it hot and you’ll have a taste to soothe your soul.

You’ve heard of Ginger Milk Tea right? But have you ever heard of Milo Ginger drink?

Picture your regular ‘Teh Tarik Halia’ but with Milo. Malaysians will love this.

Plus, the ingredients are usually there in your kitchen. Give it a try.

The preparation is the same as the lemongrass Milo drink. Just boil the ginger in water for 10 minutes and mix in Milo.

While the recipes here are all quite interesting, these are acquired tastes and probably work best as a novel idea.

Still, give the rest of their recipes which feature common creamy tastes like the Milo Pudding at their website here.

They even have nutritional information for each serving of their recipe. Talk about commitment to the consumer, right?

So, try these awesome recipes out. Your favorite Milo drink might not be ‘Milo Ais Kaw’ anymore. It might be ‘Milo Serai’. Who knows?

[Watch] How To Make A Milo Pudding With 4 Easy Steps

How A Soymilk Maker Changed My Life