The chocolate burger tastes exactly like how you imagine it to taste. 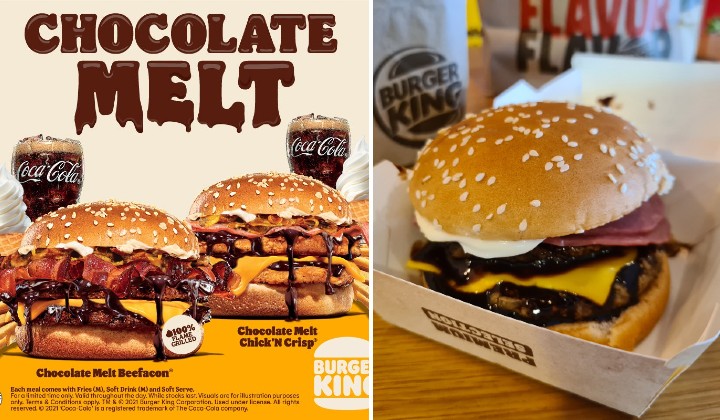 Fast food chain Burger King has introduced a burger that raises eyebrows and piques curiosity: the Chocolate Melt burger. It intoduces itself as a “savoury-sweet novelty”.

Itching to know what it tastes like? I was, too.

I don’t know how to explain the Chocolate Melt burger to you except that it taste exactly the way you assume it to taste: like a really good burger, but also with a large heaping of dessert chocolate sauce.

The burger is actually tasty, under all that sauce. Both the beef and the chicken patties were deliciously paired with the crispy onions, which lent a delightful crunch.

But the chocolate sauce, instead of harmonizing with the savoury taste, dampens and clashes with the burger. It feels very much like eating a really good burger and then shoving a spoonful of dessert chocolate sauce straight into my mouth immediately after.

Between the two, the Chocolate Melt Chick’N Crisp fared better thanks to its fried chicken patties, which has a crunchy, seasoned outer layer and crispy beef bacon strips that helps to impart a stronger savoury flavour.

The Chocolate Melt Beefacon, however, is defenseless against the chocolate sauce and what smokey grilled flavours the patty had is drowned out by the sauce. (The burger also came with soft, not crispy, beef bacon strips– we’re not sure if this is a mistake by the chain or if it’s meant to be this way.)

It really is a savoury-sweet novelty, because no other burger tastes like it, and with good reason: burgers aren’t really supposed to taste like dessert chocolate sauce.

That’s not to say that chocolate shouldn’t exist as a savoury food, not at all. In fact, Mexican mole (pronounced mou-leh) is a sauce paired with meat that commonly uses chocolate– in addition to other ingredients such as chili peppers and spices. Chocolate can also be added into things like barbecue sauce for a deeper and richer flavour.

However, it is definitely jarring to toss a sugary-sweet dessert chocolate sauce straight on a burger without much help in transitioning its flavour profile. Perhaps it would have fared better with the help of a smokey barbecue sauce or even some addition of savoury notes.

Generally, I love Burger King burgers (especially the Whopper, which I still find to be one of the better fast-food beef burgers in Malaysia) but the Chocolate Melt Burger missed the mark in my opinion.

This burger, while certainly a novelty, seems only fit for the most adventurous of foodies with undiscerning palates. Which is rather a pity, because it is a creative idea– just with a flawed execution.