The Mighty Shogun line of burgers have an eggy new twist. 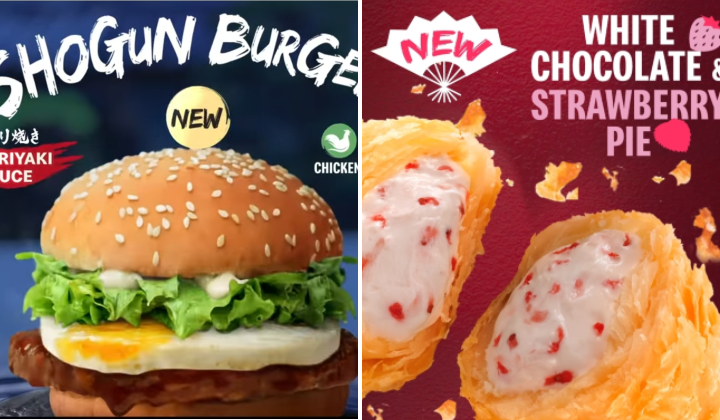 We tried out the Shogun Burger with one beef patty and one egg. Our first impression is that the burger is extremely sloppy, so it can certainly make quite a mess!

The burger uses the creamy white mayo sauce from the McChicken, the egg from their breakfast McMuffins, and the beef patty from the Big Mac. As for the teriyaki sauce, there was only a mild hint of sweet sauce on the patty, though it was mostly drowned out by other flavours.

The dessert is rather sweet, tasting like a sugar donut with very mild hints of strawberry. The little hints of fruit gets overpowered by the sugary sweetness of the white chocolate.

Still, fans of flaky pastries with fillings like a chocolate au pain would like this sugary strawberry version.

Much like how Japanese samurai clans, each vastly different, can come under one shogun, so does the different parts of other McDonald’s burgers come under the banner of the Mighty Shogun Burger.

It’s a rather odd mix-and-match burger, and midway through my first bite, my tongue gets confused expecting the taste of a Big Mac but getting something else instead. Objectively speaking though, the burger is quite alright, and the portion is quite filling as well.

You can expect familiar tastes in an unfamiliar burger, though this applies regularly to McDonald’s “new” burgers, which often reuse existing ingredients from their current menu in various new combinations.

Some may find the new combinations rather novel, while others may find it a bit of a franken-burger instead (as I did with this one).