A fund had been set up to help Malaysian families who can’t pay ransom demands. 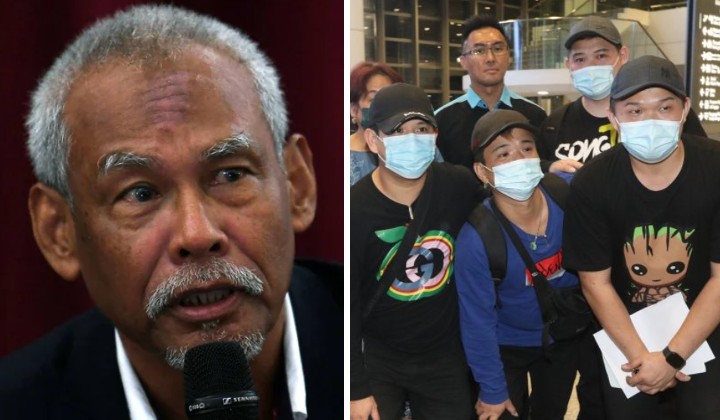 The Malaysians had made their way from Laos’s Golden Triangle Special Economic Zone (GTSEZ).

After going through many hardships, they finally took a flight back to Malaysia and arrived at Kuala Lumpur International Airport (KLIA) recently,

Sin Chew reported that after their escape was discovered, the Chinese gangsters placed a bounty of RMB1mil (RM650,000) on their heads, dead or alive.

The Malaysians escaped with the assistance of the Malaysian embassy in Laos.

They were also aided by the Laos police and Malaysian non-governmental organisations (NGOs), including Malaysian Community Crime Care Association (MCCC).

According to a pair of brothers surnamed Tan, they had been working as bartenders in Singapore.

They lost their jobs due to the Covid-19 epidemic and were forced to return to China.

After seeing an advertisement for high-paying financial jobs on Facebook, they applied.

Around March, an agent brought him into Thailand through smuggling routes and then taken into the GTSEZ.

After arriving, they realised gangsters had recruited them to work as phone and internet scammers.

He said their brothers received a salary of RMB7,000 (RM4,556) in the first month of work, and they stopped getting paid after that.

They asked to be allowed back to Malaysia but were told by their handler that they must each compensate RMB500,000 (RM325,463).

Otherwise, they would be sold to other syndicates.

Left with no choice, they kept working hard.

Apart from calling their father in Penang every few days to report their safety, they secretly asked their father for help.

At the same time, they asked their local friends from Laos for help to help them escape.

After several months of planning, the two brothers and two other Malaysians hatched a plot to escape.

With the assistance of friends in Laos, they dug a tunnel to escape from the work site and were taken away by friends on motorcycles.

One of them was nearly caught as he was on a motorcycle.

A gangster pulled on his clothes, and he was almost pulled down, but fortunately, he finally escaped.

The four stayed at their home for a few days with the help of their friend.

The father also sought the assistance of Musa.

Musa and Hishammuddin then contacted the Malaysian embassy in Laos and the Laos police to ensure the Malaysians returned home safely.

The MCCC and the Malaysian International Humanitarian Organization have jointly established a foundation to assist Malaysians trapped in Laos, Cambodia and Myanmar to return home.

One group consists of those whose family members can afford to pay the immigration fines and travel expenses, and the other group cannot pay any fees.

He said that for the latter, it is necessary to rely on the public’s cooperation and donate money to assist them.

In addition, they will submit a memorandum to the United Nations office in Putrajaya.

They demand that the relevant United Nations agencies pay attention to human trafficking in Myanmar, Cambodia and Laos.

The victims had been lured by casino jobs in GTSEZ but were forced to work as online scammers instead.

Citing former workers who escaped, RFA said the victims faced beatings and torture if they refused to work as online scammers.

Authorities in #Laos ask notorious Kings Romans Casino to stop hiring “chat girls” to scam men out of money, but compliance from the Chinese investors is uncertain.https://t.co/NFigYXcyAD

The GTSEZ is notorious for human trafficking, narcotics smuggling, and the trade in endangered wildlife products.

The region is reportedly controlled by a Chinese-born gangster-tycoon; hardly surprising given the torture, beatings and large bounty placed on the Malaysians who escaped.

Hopefully, with the repeated warnings from the authorities and testimonials from survivors, Malaysians will be more vigilant and not continue to fall victim to job scams abroad.

Inside Southeast Asia’s Casino Scam Archipelago. This is a first rate piece on the spread of Chinese SEZ’s across #Laos, #Myanmar, & #Cambodia and their implications for rule@of law, human trafficking, human rights and good governance. Do read. https://t.co/leUSipQC7a