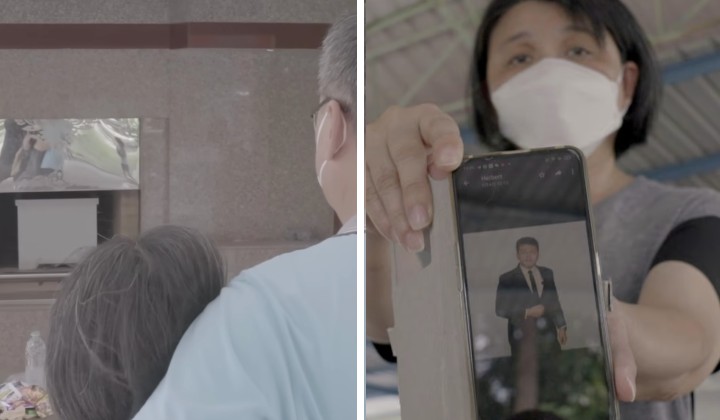 A 23-year-old trainee teacher Goi Zhen Feng was deceived into coming to Thailand on 19 January this year.

After getting to know a girl through online dating, he was supposed to meet her there in person for the first time.

Instead of romance, he was tricked by an online scam syndicate into becoming a piglet (Cantonese slang for human trafficking victim) in Myanmar.

While held captive, he contracted Covid-19 and suffered from long-term abuse and starvation, weakening his body.

To avoid trouble, the syndicate abandoned him outside a hospital in Mae Sot in April.

Mae Sot is a city in western Thailand that shares a border with Myanmar to the west,

Too Late for Help

A nurse assisted in making a call to the family, but Goh was so ill at the time that he couldn’t speak.

The nurse, who spoke to the father, asked if they were the parents of “Mu Jun Hong”, a nickname given by the syndicate.

It turned out that “Mu Jun Hong” was the pseudonym given to Wei Zhenfeng by the Human Snake Group, but it was several months later.

After a month of treatment, he passed away on 11 May but the parents only found out after they came to Thailand.

Chee Kong and his wife Yang Fei Pin arrived in Thailand on 30 August, and expect to meet their son at the hospital.

They didn’t know the news of their son’s death until the bad news came the next day.

He and his wife brought a set of clothes, a hat and a pair of new shoes for Zhenfeng.

They thought that they would be able to get their son back to Malaysia for treatment.

They recently returned to Malaysia with the ashes after their son was cremated.

A Buddhist scripture chanting ceremony was held in Ipoh, where they live, while the funeral will be held today (18 September) at a columbarium.

Throughout the ordeal, the parents received help from Teruntum assemblyman Sim Chon Siang, a PKR lawmaker in Pahang.

China Press quoted Sim as saying that due to the nickname given to Goh, his parents had to expand a lot of resource to prove their son’s identity.

The expenses included transportation expenses, paying for the earlier treatment at the hospital, going to a mass grave in Thailand to find Goh’s body and to find a
recognized hospital for DNA testing.

The family had to raise funds to pay off the hospital bill of about RM40,000 before obtaining a death certificate to carry out the DNA test.

Sim also pointed out that it is certain Goh was tortured to death, and had sustained beatings and internal damage to his organs.

All the “piglets” were treated very inhumanly. They had to work 19 hours a day. If their performance did not meet the standard, they would be punished physically, including moving bricks under the sun and run 30 laps.

Teruntum assemblyman Sim Chon Sian on the testimonial from another “piggy” who was rescued from the same syndicate.

Filled With Grief And Despair

Meanwhile, Goi’s father, Chee Kong, advised young Malaysians to be down-to-earth, even if they have grand ambitions to earn money or find a partner.

Chee Kong urged Malaysians, especially youngsters, to be careful when making new friends online and not be easily deceived.

He expressed his heartfelt words in an interview with Hong Kong’s South China Morning Post after returning his son’s ashes to China.

Goi Chee Kong to SCMP on being alert of the many tactics used by online scam syndicates.