The dirty tenant asked for grace as he just quit his job and is now unemployed, but his housemates refused. 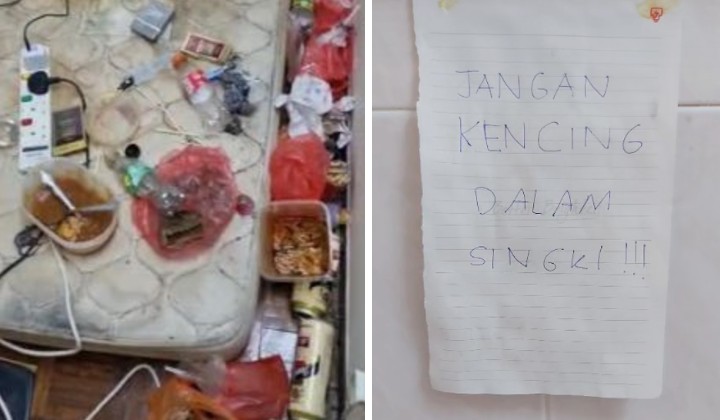 Can a tenant kick out his/her housemate for being dirty?

One of the requirements for tenancy is that tenants must maintain the rental property in a clean condition.

While the place does not have to be perfect, it must be hygienically clean.

Piles of food and trash all over the place, garbage on the floors, and piles of dirty clothes in bathrooms and the kitchen are unacceptable.

A tenant from hell not only ticked all the boxes but topped it all by urinating on the wash sink.

A TikTok user Mohd Firdaus Ismail shared a video showing the shocking state of his housemate’s room that he had just rented for 3 weeks.

According to Mohd Firdaus, he has been renting one of the rooms in the apartment unit for the past two years and lives with another tenant.

He was quoted by mStar as saying that the third room of the house was still empty before it was rented to a man in his 30s about three weeks ago.

The room was a complete mess, with food left on the bed and clothes scattered, and it is said that the room smelled unbelievably bad.

When he first came in, I wasn’t at home because I was outstation. The rental was managed by another friend who rented the master bedroom which has its own bathroom.

Tenant Mohd Firdaus Ismail to mStar on how it all went wrong.

He started to notice his dirty attitude because they shared the bathroom.

When he entered the bathroom in the morning, it smelled musty, and the sink had yellow water, which was pee.

His housemate is also said to defecate messily, despite being repeatedly warned not to do such things.

Mohd Firdaus said there were pieces of faeces on the bathroom floor, and the toilet hole was not cleaned thoroughly.

Unable to stand the behaviour of his housemate, he was determined to kick out his housemate despite being asked to be given time to move to another place.

It was not only once that he peed in the sink, but several times. I was angry because the urine was still there and I had to wash it because he was not at home.

Tenant Mohd Firdaus Ismail on why he eventually lost all patience.

Mohd Firdaus, an engineer, also revealed that the new tenant often took the food and drinks he and his other housemate bought without asking permission.

His posting had since gone viral with more than a million views.

Netizens fully agree that the landlord can give notice to tenants to clean up, or they can be evicted.

They added that confrontation isn’t easy, but it is essential to precisely communicate the issue and clearly outline what needs to happen to fix it.