Landlord Zeeda Aziz said she had had enough of dealing with troubles created by her student tenants. 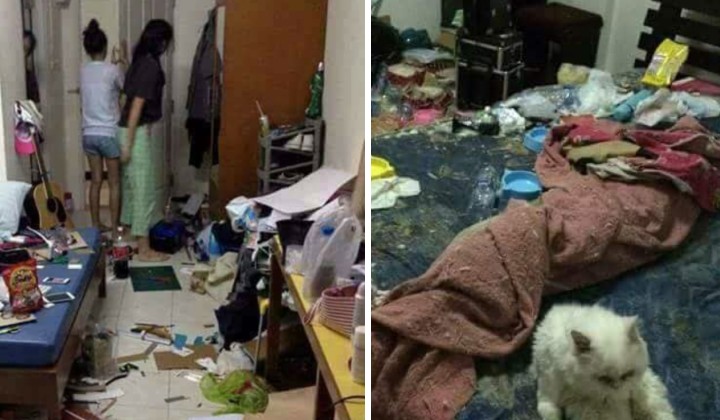 University students pursuing their studies away from their hometowns face a tough housing market.

Many said they experience discrimination, high rentals and other restrictive conditions.

It seems that landlords just don’t care except about money.

A woman named Zeeda Aziz recently wrote on Facebook that she once rented out her condominium unit in Bangi, Selangor, to college students.

At that time, she was naive and good-natured and only charged the tenants with a low-security deposit and rent.

She said the house was fully furnished and bought the tenants’ mattresses.

When the college students returned to Zeeda at the end of the first semester, the house was already dilapidated.

Why Do Many Students Live Disgustingly

The horrors include dirty floors, yellow-green moss overgrown in the bathroom, and broken kitchen cabinet doors.

Zeeda, who lives out of town, was finally forced to spend a week in a hotel with her husband to clean the house back and forth.

She found cigarette packs, condoms, and rotten underwear used for meth smoking in the house, all scattered on the living room floor.

I treat this group of tenants as my own children and it’s disappointing that they are behaving irresponsibly.

To make things worse, these college tenants still owe up to RM1,500 in electricity bills, and the seized mortgage is not enough to pay.

Zeeda’s story of dealing with “tenants from hell” doesn’t end there, as she continued to rent the apartment unit to another group of college students.

This time, she signed a rental agreement through a lawyer and imposed a considerable sum as a deposit.

She also stated in the agreement that the house must be returned in perfect condition.

She said the tenants again turned the house into shambles with unattended garbage, dirty sinks and disgusting bathrooms.

She accused the college students of forcing her to return the deposit, by saying they came from poor families and needed the money.

I asked them, what happened to your promises? Don’t use poor people as an excuse to be irresponsible tenants.

She ended up spending thousands of ringgit on repairs and refused to return the deposit to the group of college students.

Zeeda pointed out that many homeowners, including her, are afraid to rent the house to students.

She hopes that parents, if they can, will visit their children’s rental units from time to check.

Zeeda said the rising cases of university students who cannot rent a place to stay are not the property owner’s fault.

I’m just sharing my experience and I don’t want to take any chances. As for the students who are still looking for rental houses, I can only say ‘good luck to you. It’s all because of your seniors who left us traumatized.”

Many netizens commented that they agreed, and some people shared the same experience they had.

Student tenants vandalized the house, and the seized mortgage was not enough to pay maintenance fees and water and electricity bills arrears.

In addition, some people shared that they had encountered roommates in hell.

The bathroom was dirty, and the lamp tube was broken and could not be replaced because “this is the responsibility of the owner.”

The whole house is so dirty that the neighbours often complain about it.

Is There A Solution?

Property management expert Calvin Chai from Ipoh said students are often young at the beginning of their adult lives.

He pointed out that renting to them certainly has positives and negatives.

Youngsters tend to be more social, and they will throw parties and thus will generally be harder on the unit than older tenants.

Chai, whose clients include working professionals and university students, said that nine out of 10 cases often result in properties with much wear and tear at the end of the tenancy.

Sometimes they tend to be later with rent payments as they typically don’t live a life like mature adults already working and earning salaries.

These problems have been around for the longest time. But now we are hearing it more because of social media.

He also noted that female students tend to be much more responsible than boys.

At the same time, Chai reminds us that each tenant may behave entirely differently.

His advice to property owners is to screen their tenants carefully or use the service of property management companies to make life easy.

It’s also better to have rental agreements that includes cleaning services, as they are generally affordable when shared among a group of students. On average, it wont cost more than RM200 per person. It would be a win-win for both property owners and the students.

Urinating In Wash Sink, Tenant From Hell In Puchong Gets Kicked Out By Housemates