Police investigation revealed that the car was reserved for use of a Yong Peng assemblyman. 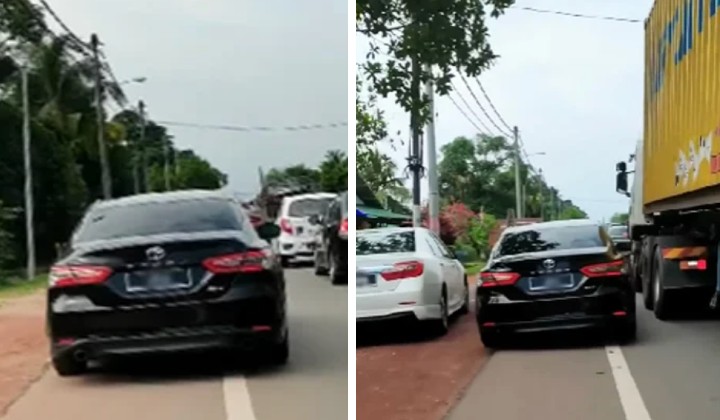 When individuals violate the law, they face prison, fines, injunctions, damages, and any number of other unpleasant consequences

But the power, influence, and money they wield for VIPs will go far in getting away with law-breaking.

However, the police recently showed that VIPs are not above the law.

The driver of a black Toyota Camry reserved for the use of a Johor state exco was fined for using the emergency lane to cut the queue in Batu Pahat.

Batu Pahat District Police Chief Ismail Dollah said the driver of the black Toyota Camry was called at 3.30 pm for the offence.

He said his party received a viral video about the incident at 11 pm last Wednesday (14 September).

The investigation found that the offence occurred at Jalan Tongkang Pechah here at 9.45 am last Monday (12 September).

Previously, a 24-second video showing the actions of a car belonging to the state government exco.

The vehicle was caught using the emergency route when the road was believed to be congested in Tongkang Pechah.

The footage has since gone viral on social media as netizens fume that those who hold power can break the law with impunity.

READ MORE: [Watch] Yet Another Ambulance Forced To Make Way For VIP, Despite Different Direction

Under Rule 53(1) of the Road Traffic Rules 1959, driving in the emergency lane is an offence.

Meanwhile, it was reported that Ling apologised for the error.

Ling was quoted on social media as saying that he was riding in the vehicle’s passenger side at the time of the incident.

Ling explained that because he wanted to catch up, the driver entered the emergency lane near an intersection to make a turn.

He was on his way from Yong Peng to Batu Pahat.