After cutting into the lane, the male driver alighted from his car to show his car plate and pointed to his mobile phone. 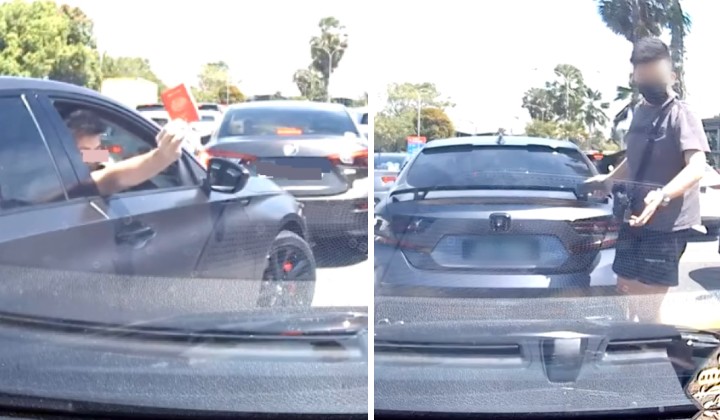 A male driver went viral for cutting into the lane of others while flashing his Malaysian passport.

The incident reportedly happened at the Malaysia–Singapore Second Link heading towards Johor Bahru on Saturday (6 August).

It was recorded on the dashcam of a woman driver whom the male driver had cut the queue.

The woman, Joana Loh, posted the dashcam recording on Facebook.

Based on the posting, the male driver appeared frustrated when other vehicles seemed reluctant to give way.

As other vehicles continued to move forward, the man rolled down the window of his black Honda.

He made aggressive gestures before flashing his Malaysian passport at the other driver.

As he got out of his vehicle, it was not enough for him to point at his Malaysian car plate.

He also showed his mobile phone to warn the woman in the other car.

Meanwhile, Loh pointed out that she and her fellow occupant in the car are also Malaysians.

Loh said they would have gladly allowed the man to cut in if he had asked politely instead of bullying fellow countrymen.

Malaysian Joanna Loh telling the man that wrong is wrong.

She added that driving a car with a Singapore licence plate doesn’t necessarily mean the driver is Singaporean.

Even if it is, it does not give Malaysian drivers any right to harass or bully Singaporeans on the road.

You were already in the wrong for not signalling, we didn’t have to let you cut into our lane.

Malaysian Joanna Loh lambasting the man for being a road bully.

Loh explained that they were stuck in a four-hour-long jam after exiting the ] checkpoint.

The massive jam was due to people travelling overseas to take advantage of Singapore’s upcoming National Day holiday on 9 August.

Meanwhile, some netizens said the woman allowed the male driver to cut into the lane as she left a gap in front of her car.

They said the woman should have been gracious and let the guy cut in instead of inching forward.

Netizens added the incident also reminded them of another road rage drama at the Malaysia immigration checkpoint involving a Singapore-registered car.