The case is being investigated under Section 427 of the Penal Code for committing an act of treason. 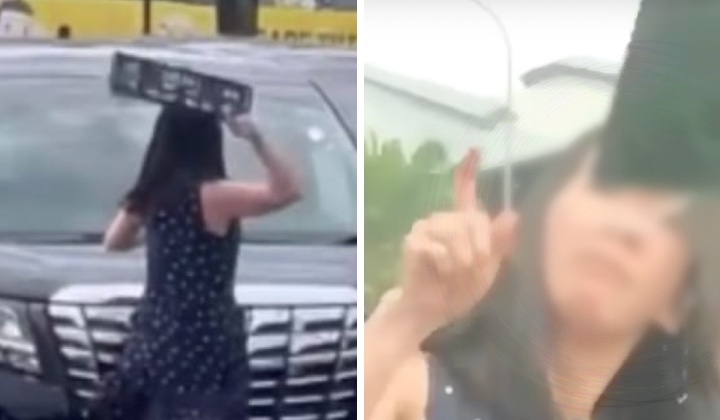 Johor police are looking for a woman who ripped off the licence plate from the front of a Toyota Alphard.

The incident happened on Saturday (9 Jul) at the Tuas Second Link Immigration and Quarantine Complex (CIQ).

In a statement, the police said she is wanted for committing the offence, which happened near the Sultan Abu Bakar Customs, Immigration and Quarantine Complex in Johor Bahru.

Police had acted on a video of the incident, which went viral.

Iskandar Puteri Johor police chief Rahmat Ariffin noted that the authorities are still identifying the suspect, who was riding in a red Kia Cerato with a Singapore plate.

During the incident, the victim driving a Toyota Alphard changed lanes to the right and had scraped a Kia. The suspect stopped the car while a Chinese man and woman got off.

The man shouted dirty words and made obscene gestures (towards) the victim, while the woman opened the victim’s car plate and threw it into the victim’s windshield.

Rahmat added that the victim was on his way back to Singapore from Forest City in Johor.

The victim did not suffer any injuries and only minor damage to his car. Footage from the dashcam camera was also recorded (as evidence).

The case is being investigated under Section 427 of the Penal Code for committing an act of treason.

Netizens in Singapore and Malaysia are now asking the authorities to immediately arrest the woman and man for illegal acts of treason.

They commented that any misunderstandings that arise on the road should be dealt with calmly and referred to the authorities.

Netizens added that it is useless to show anger on the road because it might be recorded, making things worse for the culprit.

New videos have also been added to social media, which shed light on what actually happened.

Facebook user Linni Malik, who uploaded the dashcam footage, said her son-in-law shared the videos with her.

The person driving the Toyota Alphard was his father.

Additional photos and videos were also put up on social media by Mhzq Ziq, a family member of the victim who was also in the Alphard when it happened.

Some netizens go further and take justice into their own hands by shaming the woman on social media.

Another family member of the Alphard said the public should stop ‘attacking’ the driver and passenger of the Kia car in the case.

Civil servant Muhammed Haziq, 25, who also uploaded a video on the incident, said the driver and passenger of the Kia were mistreated, and he felt sympathy for them.

He regrets that netizens are disclosing all the confidential and personal information of the two individuals to the public.

He said his family is unsure if that is her and if the man is her husband.

But if that was her, I believe that the way he was treated was unfair. I would appreciate it if people stopped spreading her pictures.

According to Haziq, he was not with his family when the incident happened.

His 51-year-old father was driving, along with his mother, 51, and two sisters aged 9 and 17, on their way to their property in Forest City, Johor Bahru.

Haziq said his father, at that time, saw that there was room to enter the right lane and turned on the right traffic light.

However, the red Kia car refused to tolerate it and immediately moved forward until an unfortunate incident occurred.

For Haziq, he uploaded the video as a reminder to the public to be careful on the road.

At the same time wanted the woman to come forward to solve the problem in a good way.

My dad just wanted to repair his car and claim the damage done by the woman.

Civil servant Muhammed Haziq urged people not to make the incident any worse.

In a Chinese daily newspaper, Shin Min Daily News, the woman claimed that the Alphard driver provoked and asked her son to get out of the car.

She said the Alphard had repeatedly cut in, adding they had been stuck in the traffic jam for about an hour.

I wanted to forget about it, but there were others who stopped and scolded my son. They even provoked him to get out of the car to fight, but my son ignored him.

The Kia woman on why she was angry.

She added that she was hurt and upset, that’s why she pulled out the number plate and threw it at his car window.

The woman later realized that both her legs were bleeding as a result of her altercation with the Alphard.