Sultan Ibrahim Iskandar advised the people not to hold street rallies as it would only harm the country. 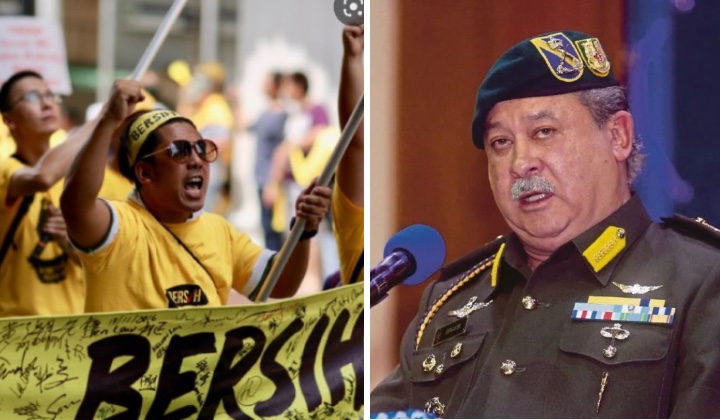 The Sultan of Johor, Sultan Ibrahim Iskandar, said street rallies, contrary to what was proposed by a DAP leader, will not solve problems.

Recently, a member of the DAP Central Executive Committee, Sheikh Umar Bagharib Ali called for the people to gather in large numbers as a sign of protest following the rising cost of living, as reported by a local online news portal.

The Johor monarch said on Facebook that voices or views of the society can be conveyed to the government through other channels.

Isn’t it enough to learn from the demonstrations that became a black moment in the history of our country, like in 1969, and not so long ago, the Bersih rally?

Sultan Ibrahim said it did not achieve any goal other than causing chaos and damage, adding that this is not the way of the country where no one wins.

He cautioned that everything will be lost, and people won’t know how long it will take for the country to recover from the effects of such a rally.

The laws of our country must be respected. Do not make seditious statements because it does not help, while there are many more constructive channels to express views.

Sultan Ibrahim Iskandar reminding the people to respect and uphold the law.

He said street rallies would also harm the country’s economy, intimidate foreign investors and hamper the country’s recovery from the Covid-19 pandemic.

Sultan Ibrahim stressed that the growth of the country must be nurtured through mature dialogue, and not actions that will threaten public order and national security.

So far, netizens are divided over the topic.

Some said Sultan Ibrahim is giving wise counsel, while others call for peaceful rallies as as a freedom of expression.

Others express hope that there will be a solution to deal with rising prices.

READ MORE: Chicken Prices Will Be Controlled, After All, Ceiling Prices To Be Announced

Malaysia Was Born Out Of A Protest Movement, Says Bersih

The Bersih election watchdog disagrees with Sultan Ibrahim’s views that street protests are ineffective and irresponsible.

Bersih begs to pray not to agree with my lord’s views and would like to pray for a few things to show that protest is a legitimate method of political expression and also shapes the history of our country.

Bersih noted that Dato Onn Jaafar had led the masses to oppose the Malayan Union, which was forced by the British after the Second World War.

Bersih went on to add that Dato Onn and Umno are not the only parties that use protests as a legitimate way to act collectively.

Other examples include multi-racial parties such as the Putera-AMCJA coalition led by leaders such as Ishak Haji Muhammad, Tan Cheng Lock, K Ganapathy and Dr Burhanuddin Helmy.

Bersih added that protests were also organized to highlight the 1Malaysia Development Bhd (1MDB) scandal in which RM42 billion has been misappropriated.

We demand institutional changes to existing laws to end the scourge of corruption in the neagra and for the criminals involved to be held accountable.

Bersih explaining why the people should be given the opportunity to express their anger at injustice.