The kids also threw rocks at passing cars and trashed a mini market. 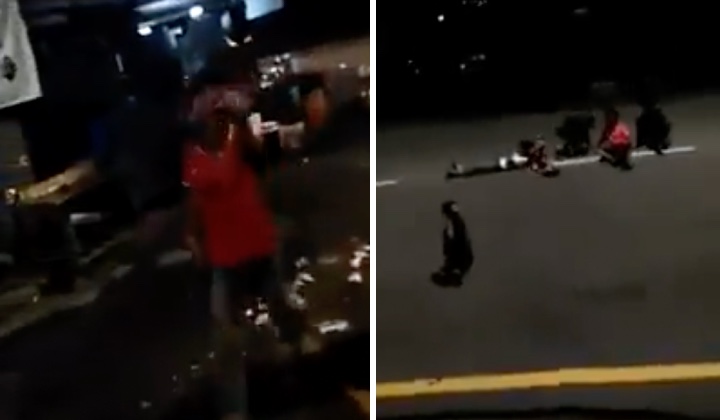 The public was appalled after a video showing kids lying down in the middle of the road for fun which was first published in 2019 resurfaced on social media recently.

In the 18-second recording, loud noise can be heard as if an object had hit the vehicle.

The old video was recently shared by Twitter user Jacky Gee and was retweeted more than 2,300 times.

HOLY 💩..After the Lajat Bicycle Gang, a new Hobby is rolling on the road. Malaysia is blessed with so much innovative youths ! I wonder how many years of jail time for the drivers who dare to run over these brave warriors ! 😱 pic.twitter.com/oSbcSC3Kve

And the same kids causing having by ransacking and damaging nearby small grocery shop pic.twitter.com/ZZ5hxYNguq

The posting led to netizens sharing other videos, including one showing a group of kids trashing a grocery store.

The incident, allegedly involving the same group of children, was said to have occurred in an area in Kuala Lumpur.

When one of the kids was reprimanded, he looked angry and repeatedly issued abusive words to the individual who recorded the video.

Not stopping there, the child started to kick things around him as if expressing his dissatisfaction.

The videos received various reactions from netizens who criticized the children’s behaviour.

Some sarcastically remarked that the road should be reserved for exclusive use by the kids and the driver should be held responsible.

At the same time, they said parents need to be accountable for their children’s behaviour.

The incident drew reference to the case of Sam Ke Ting, who was recently sentenced to six years’ in jail and fined RM6,000, or six months’ jail in default.

The Court of Appeal then granted her bail of RM10,000 in one surety and leave to appeal against her conviction.