Police suspect that the cats died due to poisoning. 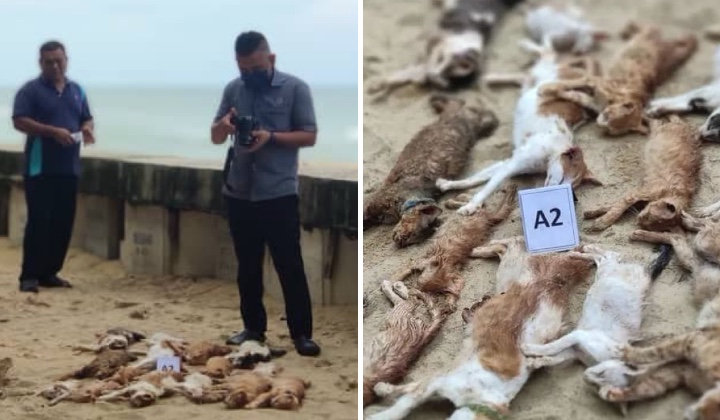 Police are investigating a recent incident of 20 dead cats believed to have been poisoned in an incident at a resort area around Pantai Bukit Keluang in Besut, Terengganu.

Besut District Police Chief Superintendent Abdul Rozak Mohammad said in a statement that the case is being investigated under Section 428 of the Penal Code (cruelty on animals) which carries a jail term of up to three years or a fine or both.

The police received a complaint from a local man around 10 am on Sunday informing of the incident. The preliminary investigation found that there were several dead cats around the beach. Two died near the beach while 13 others died on the ground near trees.

According to Abdul Rozak, the complainant believed that the deaths of the cats were due to cruelty by irresponsible individuals or groups.

There are traces of blue bruises on the cat’s stomach, blood on the mouth and nose and some are scattered in the stomach.

He added that a total of 15 cats had died while two others are still alive but in pain.

The dead cats were buried in the area.

Netizens Anger Over Poisoning Of Strays

The reaction online was angry, with people urging others for the culprits to be arrested.

Everyone involved should get what’s coming to them, said netizens.

Some are worried about the prevalence of animal cruelty in the country.

They pointed out that the way in which a human treats their pets and other animals reflects something about their psychological well-being.

There have been reports of dead domestic animals and even elephants after eating poisoned bait.

1. 8 dogs, believed to have been poisoned, have been found dead near a row of shoplots in Lahat Mines, Ipoh.

This comes after 17 stray dogs were found dead at the same location in May last year. pic.twitter.com/VJ7VyVLMDy

This Cat ‘Buys’ Fish With Leaves, But Some Are Not Buying The Story