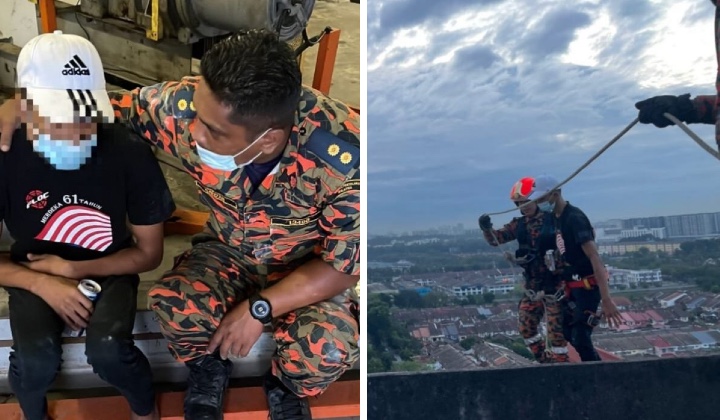 Upset over failing to contact his girlfriend, a man tried to end his life by jumping off an 18-story apartment in Taman TTDI in Shah Alam.

According to Kosmo, the 27-year-old man informed his friend in Penang about his actions.

As he was about to take the plunge, a team of eight members including officers from the Kota Anggerik Fire and Rescue Station arrived at the scene.

Selangor Fire and Rescue Director Norazam Khamis said his men got into action after receiving an emergency call at about 3.30 am.

The firefighters reached the scene in just five minutes and proceeded to carry out persuasion and rescue operations.

At the same time, they proceeded to set up air mattresses below the apartment.

Based on information received, the man acted in such a way after to failing to contact his lover.

The man, who divorced his wife in November last year, had also previously tried to commit suicide in Penang.

Norazam added that the nearly four-hour operation was also assisted by the man’s brother and ex-wife.

He did not rule out the possibility that the man is emotionally stressed.

The man had been handed over to the police for further action.

There had been concern about rising suicides in the country amid the coronavirus pandemic.

Several measures had been proposed to address the rising suicide rate.

Among them is the setting up of a national suicide registry.

The federal government had also been urged to lay out a clear timeline and tangible plans to repeal Section 309 of the Penal Code to decriminalise suicide attempts.

The purpose is to ensure that these individuals are given the necessary therapy and support needed.

Decriminalisation of suicide is also meant to allow people to talk about suicide and mental health in a safe manner.

READ MORE: Attempted Suicide Is FINALLY Being Decriminalised In Malaysia