The victim is now living in fear after their house in Taman Muhibbah was mistakenly splashed with red paint. 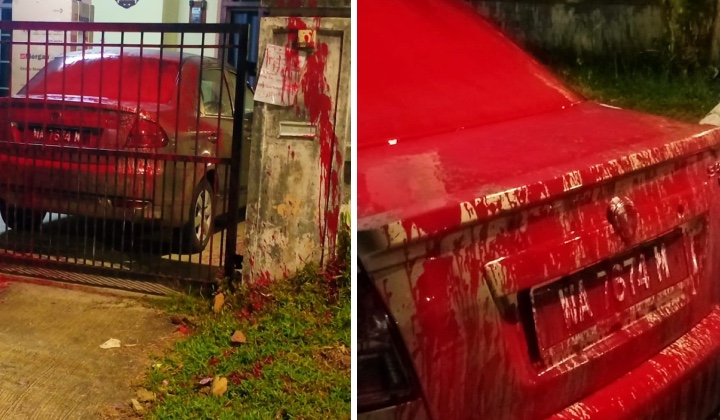 Recently a posting went viral on Facebook when a netizen revealed that his house and car were splashed with red paint by ‘Ah Long’ or loan sharks.

In the posting by Facebook user Azhar Md Arif, he was shocked because it was his neighbor who owed the loan shark and not him.

According to Azhar, the incident happened at about 12 last night when he heard the screams of a neighbor in front of his house.

Azhar Md Arif on his encounter with the Ah Long

Apparently, as soon as he came out of the house, two men on motorcycles were seen walking away from the neighbor’s house after throwing a bottle of red paint in front of the house.

In the meantime, Azhar said he made the post so that the public would be more vigilant.

Azhar also asked for the people to pray for him so that he would stay safe after being harassed by the ‘Ah Long’.

Netizens pointed out that the victims often fall into a cycle of debt if they took out high-interest loans with Ah Longs.

They described it as a recipe for absolute further financial trauma for the borrowers.

Others noted that it is an act of bullying and they wonder how could the loan sharks think that it was okay.

Netizens also expressed outrage at receiving random messages from Ah Longs demanding them to pay back loans they never took.

They demanded that the loan sharks be dealt with severely in accordance with the law, for deliberately damaging properties and disrupting public safety, peace and security.

But why do people keep turning to Ah Longs?

Sometimes, borrowers did not have the language skills to understand the implications of signing up with loan sharks.

They also turn to ah longs because they struggled to get low-interest bank loans without a credit history.