The complainant claimed that other passengers were not made aware or given any instructions after arriving at their destination. 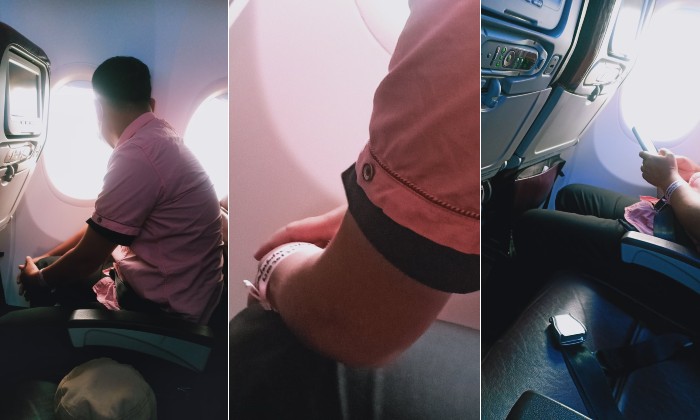 A Malaysian Airlines (MAB) passenger took to social media with her concerns that another passenger that was sitting across from her on a flight from Kuala Lumpur to Kuantan, Pahang was allegedly allowed on board while wearing a pink Covid-19 quarantine wristband.

A Facebook user who requested to remain anonymous wrote an open letter to MAB, the Health Ministry, and its Minister, Khairy Jamaluddin, with claims that a male passenger who boarded the flight on 2 January, appeared to be wearing a pink tag, similar to the ones given out to Persons Under Investigation (PUI) and individuals who are ordered to undergo Home Surveillance Order (HSO).

Fun fact: PUI and HSO wristbands can come in different colours aside from pink; white, blue, red and yellow. Depending on its availability and location where it was issued. It’s worn by individuals who either had close contact with a Covid-positive patient, people who are returning from overseas as well as those who reside in areas placed under Movement Control Order (MCO).

On the 2nd of January 2022, I boarded MAS Flight MH 1276, seat 11D, from Kuala Lumpur to Kuantan. Just as the plane was taking off, at the same row to my right, I spotted a passenger seated at 11F to be wearing a pink tag on his left wrist, in current times similar to the ones worn during quarantine related to the Covid-19 infection.

Sharing several images of the passenger in question, she said that she was unable to see the writing on the tag clearly but claimed that it had dates marked on it.

Pictures showed a man seated on the window seat of the plane, wearing a pink shirt that matched the colour of the wristband on his left arm.

Writings on the tag were hindered due to the orientation of his wrist and movements, but the noticeable date could be seen as – 09/01/2022.

After informing flight attendants about her concerns, she was later relocated to another seat on the plane. But she claims that little was done after that and that none of the other passengers was made aware of the situation.

The nearest flight attendant was informed. Equally as shocked that this could have happened, she subsequently reported this to her colleague. A male flight attendant relocated me and spoke with passenger 11 F ( male with pink tag).

Upon arrival at their destination, she was told by one of the attendants that they would make a report about what had happened, but no further instructions were given to her or the other passengers as they disembarked the aircraft.

She said that she later filed two separate complaints to MAB and the airline had informed her that they were investigating the issue.

She included a snapshot of a reply she got from MAB via email, saying that they’ll get back to her within a week or two.

She suggested that there might have been a sensible reason as to why the passenger in pink was allowed on the flight but questioned why other passengers weren’t informed of the situation or isolated from him during the duration of their travel.

Perhaps, in the tiniest of possibilities, there may be a sensible reason as to why a passenger as such ended up seated in a KL-Kuantan flight. And for exactly that reason alone, this should have been promptly investigated and clarified. And even so, why was he not isolated away from the rest? Why was he allowed on the plane in the first place, are we missing something?

At the time of writing, TRP has submitted an enquiry to MAB and are awaiting an official response. We’ll provide you with updates as soon as we get ‘em.