The senior citizen vowed to change his surname if he does not live up to his threat. 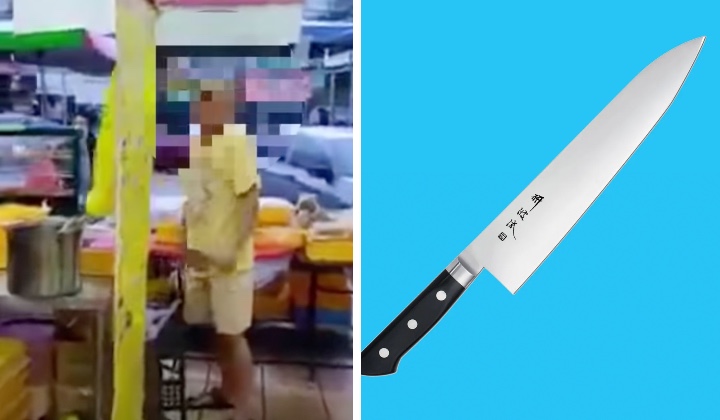 There is a Chinese saying that the older the ginger, the spicier it is – meaning that wisdom comes with age.

But more often than not, having more life experience doesn’t necessarily make you a better person.

Recently, China Press reported a senior citizen who barged into a kopitiam and started threatening the tenants with a kitchen knife.

Accordingly, he was furious that the kopitiam tenants had complained about him.

The reason for the complaints: pouring water and throwing garbage from the window at will.

The fracas was recorded by one of the kopitiam tenants and uploaded on social media.

Can You Reason With A Ruffian?

In the 58-second video, the senior citizen, was seen barging into a kopitiam.

Dressed in a yellow shirt and shorts, he had a kitchen knife in his left hand.

The uncle shouted threats in Cantonese at one of the kopitiam tenants, who tried to reason with him.

The uncle bragged that he is a gangster, as a warning not to mess with him.

Even gangsters need to talk reason.

One of the kopitiam tenant trying to reason with the uncle.

He also exchanged verbal volleys with a woman who is heard but not seen in the video.

The uncle said he heard that one of the tenants complained about water being poured recklessly onto the streets and hit passers-by.

Not only did the uncle not apologize, but he also provoked by brandishing the knife.

The woman said that besides pouring water, the culprit also threw garbage from the window.

The uncle denied it, and the woman asked him to ask his family members if they had ever done so.

The woman also complained that they had been doing business there for 9 months, and the problem started from day one.

In a parting shot before leaving, the uncle fired another warning.

If I do not cut you down, I would take your last name.

Furious uncle making a threat after being complained.

Fortunately, no one was injured in the incident.

It’s believed that the incident happened in Taman Yulek, Cheras. The specific location is unknown.

The kopitiam tenants didn’t wait to find out if the uncle will carry out his threat.

A follow-up report by China Press said a police report was made against the uncle.

Accordingly, the police have identified the knife-wielding man in the incident which happened at 7 am on 3 December.

ACP Mohamed Mokhsein said the suspect – a 60-year-old – rents the unit above the kopitiam.

The police are investigating the incident as criminal intimidation under Section 506 of the Penal Code.

The public is also reminded to behave rationally and refrain from any act that could cause social unrest.

Let this serve as a reminder that whoever is slow to anger has great understanding, but he who has a hasty temper exalts folly.

Hopefully, the uncle will not stir up strife, nor give in to anger and cause further transgression.