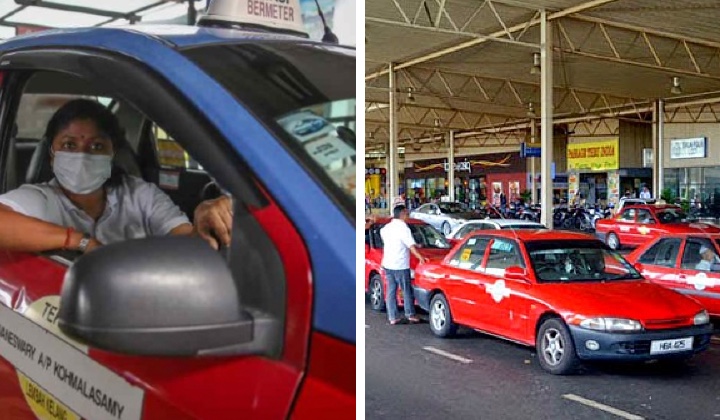 Taxi drivers in Klang Valley said the difficulties they faced in getting passengers over the past few years have only worsened.

According to a report by Kosmo, most taxi drivers and operators strive to earn between RM50 to RM60 a day.

This was revealed by a taxi association member in Shah Alam known as Abdul Rahim.

I don’t know how long I can survive. It’s hard to get RM50 a day. Last time, we used to be able to earn RM200 to RM300 a day. On weekdays, we earn more because more people would go out shopping or sightseeing.

Back in the days before the advent of e-hailing, many taxi drivers had paid several thousand ringgit each as a deposit for taking delivery of a new cab from taxi companies.

Accordingly, many signed rental-purchase agreements without fully understanding the contract and commitment.

The situation is made more complicated by the method of calculating monthly installments based on daily rates.

This resulted in taxi drivers not being able to afford the car installment and even association fees.

At times, they could only earn less than RM30 a day, and there are days when there is no income at all. Many of my friends had to hand back their cabs to taxi companies and switch to other jobs, such as truck and bus drivers, to survive.

Abdul Rahim added that previously, his association had almost 50 taxi drivers, but now the number has been reduced to 23 people.

There are some who plan to quit if this situation continues.

The same situation was experienced by a taxi driver in Subang Jaya known as Rahmat, 66, who said his income had dropped by 50 to 70 percent over the past few years.

Many of my friends have switched to e-hailing. But for those as old as me, wanting to use a smartphone is also ‘complicated’. After all, to join e-hailing, there needs to be a new vehicle.

Rahmat said as long as his taxi can still move and has passengers, he will continue to drive the taxi even though it’s not as ‘lively’ as before.

Too Little, Too Late

It’s not that the government did not help.

In 2009, the Commercial Vehicle Licensing Board (CVLB) increased the fare of budget taxis to RM0.87 per km and RM17.14 per hour.

Under the scheme, taxi drivers can purchase Proton Exora at a special price and use it as a taxi.

Some 1,000 Teks1M permits were distributed to individual drivers with 697 in the Klang Valley, 251 in Johor and 52 in Penang.

But the writing was already on the wall for taxi drivers by then.

To this day, the government continues to help out taxi drivers from time to time.

Perhaps it’s better to let the market forces dictate the survival of the taxi industry than to have the government hand out temporary relief measures.

The Chinese have a saying, it’s better to suffer short-term pain so that one will not have to suffer long-term pain.

It’s better to just get it over with, rather than prolong the agony.

[Watch] Passenger Gets The Safest Ride Ever Complete With Aircond Holes

An Act Of Kindness Highlights Flaw In National Infrastructure