The money on top of each food pack for the elderly was allegedly a bribe. 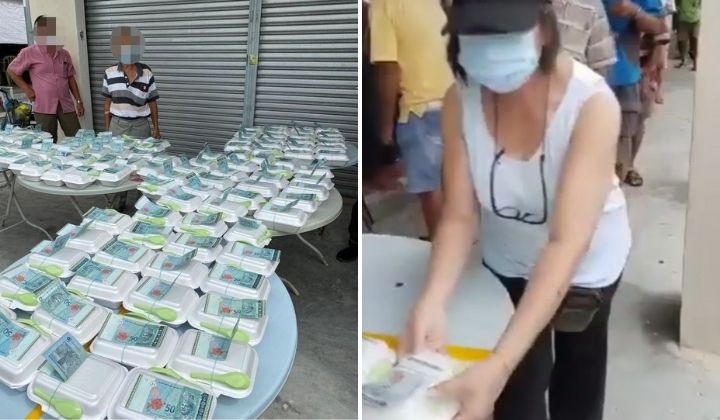 Recently, a video that went viral showed a group of senior citizens lining up to collect food and it allegedly took place in Melaka.

What caught everyone’s attention is the money tied around each individual food packs. In pictures, the RM50 notes could be clearly seen secured on top of each food pack with a rubber band.

According to Kosmo!, netizens were quick to conclude that the money was used to bribe the senior citizens since the state election is happening soon.

However, the rumour was put to rest when the head of the Criminal Investigation Department (CID) of the state, Azlan Abu confirmed that the food distribution initiative for the elderly had nothing to do with the upcoming state elections.

Azlan also said the event did not take place in Melaka and investigations did not spot any political elements nor any activities to gain public votes.

According to the police statement, the police did not receive a report regarding the matter.

Despite this, the police will proceed with an investigation under Section 233 of the Communication & Multimedia Act and urge the public not to spread false information.

There have been several allegations relating to the upcoming state elections.

In Phase 4 of the National Recovery Plan, the standard operating procedures (SOPs) include a ban on any activities, gatherings or social events related to the upcoming elections in Melaka.

On 28 October, Barisan Nasional was fined RM10,000 for not observing physical distancing at a social event at the World Trade Centre Kuala Lumpur (WTCKL).

Parti Keadilan Rakyat was fined the same amount for conducting a crowd-less virtual talk in Melaka a few days later on 31 October.

Bersatu also had to deny allegations that the former prime minister Muhyiddin Yassin was handing out bribes to people in Melaka.