Muhyiddin was caught on camera handing money to a man at a Gerai Prihatin Rakyat in Melaka. 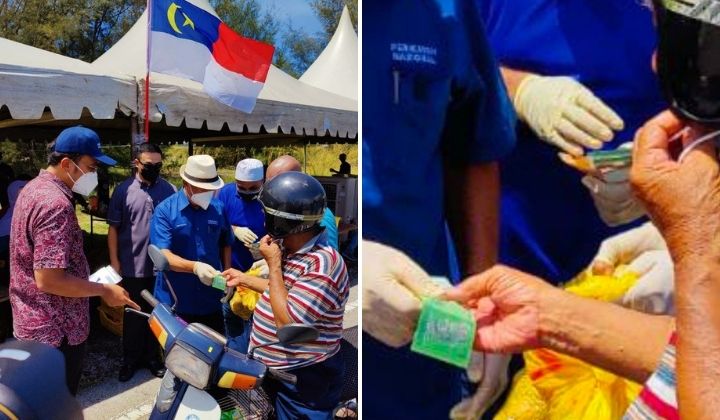 Whether we like it or not, bribery is part and parcel of any political situation in any country.

This is why when @SyedAkramin posted this photo on Twitter and tagged the Malaysian Anti-Corruption Commission, netizens thought the former prime minister Tan Sri Muhyiddin Yassin was paying a bribe in broad daylight.

In the picture, Muhyiddin could be seen handing a green RM5 note to an elderly man on a motorcycle.

After the tweet went viral, Bersatu vice-president Mohd Rafiq Naizamohideen clarified that Muhyiddin was giving the elderly man his change at a Gerai Prihatin Rakyat in Melaka.

In a report by Malaysiakini, Mohd Rafiq said the allegations of bribery were slanderous and meant to defame Muhyiddin.

He explained that the Gerai Prihatin Rakyat which sells sundry goods at cheap prices was organised by an NGO.

However, it has been closely linked to two political parties namely Bersatu and Perikatan Nasional.

The Gerai only sells four items: 2kg potatoes, one whole chicken, one carton of eggs and one 200g Milo packet. The items are sold for RM15 to one member from households earning below RM4,000.

Electoral watchdog Bersih has previously said in a statement that the cheap sales can be seen as another tactic of ‘vote buying’ and it’s an election offence.

The Election Commission (SPR) said it would only investigate the claims if a report is made by Bersih.

Only PM Can Decide On My Cabinet Post, Says Zuraida