Mahiaddin says he refused to go against his principles just to retain his post. 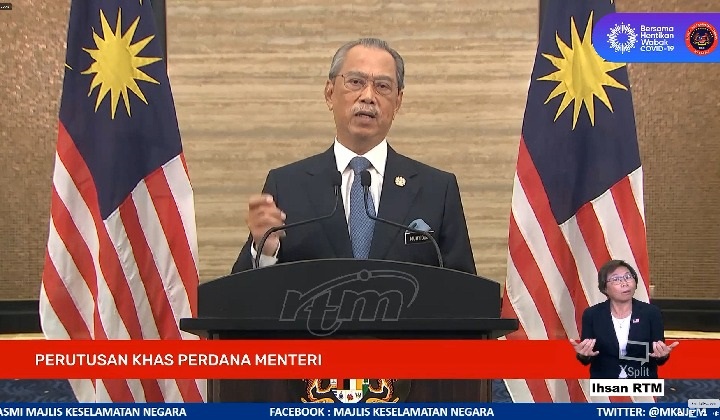 Prime Minister Tan Sri Mahiaddin Md Yasin has admitted that he has lost the majority in Parliament and is stepping down from his post along with his Cabinet.

In an announcement today, he said that these are unprecedented times and said that he also faced threats but said that he remained firm to not bend to the will of political opponents.

The Pagoh MP hopes that a new government will be formed soon as these two months are important, he said, as Malaysia is set to achieve herd immunity by October.

In the address, he also said that 87 million vaccine doses have been bought for Malaysians, saying that is it more than enough to cover the rakyat by October.

If the vaccination program goes well, all of you will be vaccinated by the end of October.

Mahiaddin is confident that Malaysia is going to recover from this pandemic, saying that the category 4 and 5 patients have been decreasing in hospitals around the Klang Valley.

He also thanked the frontliners, saying that they have been giving their all to fight their pandemic.

He also thanked all organisations which have been collaborating with the government saying that they have helped him in fighting Covid-19.

Mahiaddin finally gave his thanks to his wife and the other parties who have supported him, including a handful of UMNO members up to the very last minute.

He finally ends his speech with a prayer, asking for God to protect Malaysia from Covid-19.

[Just In] GE Likely To Be In July Of Next Year, Says PM