His crowdfunding experience includes campaigns to buy laptops and tablets for underprivileged students. 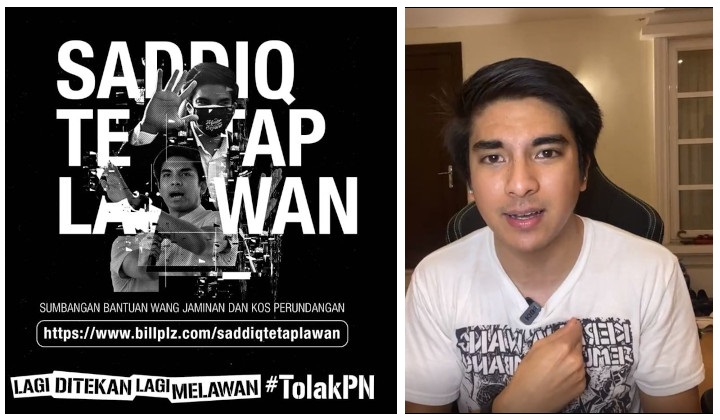 In a follow-up to his ‘Not Guilty’ plea for misappropriating RM1 million belonging to Bersatu, former Youth and Sports Minister Syed Saddiq Syed Abdul Rahman has now started a crowdfunding campaign to help fund his legal cost as well as his RM330,000 bail.

The Muar Member of Parliament took to his Twitter account yesterday (22 July) and posted a poster for his fundraising campaign accompanied by a caption that read:

Want to Fight? I’ll fight. Bring it on.

Meanwhile, on his Instagram account, an hour and 18-minute video was recorded in which he maintained his innocence and asked his supporters to share the video and contribute to his crowdfunding campaign.

Until the case is adjudicated, Syed Saddiq has had to surrender his passport and will report to the nearest MACC office in Kuala Lumpur once a month.

Not new to crowdfunding

His latest request for crowdfunding may be to support his legal fund, but crowdfunding is not new to Syed Saddiq.

Last year, he formed the Malaysian United Democratic Alliance (MUDA), a youth-focused political party that runs mainly on crowdfunds from a large donor base but with strict policies around how much each person can give to the party.

As reported on GovInsider, he wants MUDA to run like a “political startup, which is lean and mean, but very focused on policies”.

Syed Saddiq used the same crowdfunding strategy to help the underprivileged in his constituency of Muar, Johor where he launched two fundraising campaigns to buy laptops and tablets for underprivileged students.