Aid will be distributed to applicants within 24-hours. 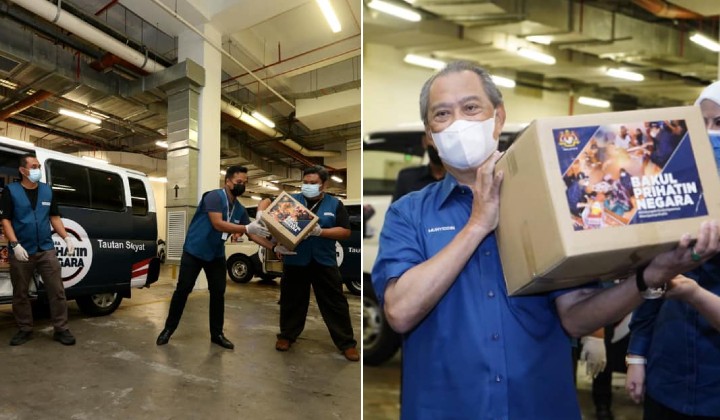 “There is no need to put up white or black flags,” said Prime Minister Tan Sri Muhyiddin Yassin at the launch of the national ‘Bakul Prihatin Negara’ food basket program – the government’s campaign to distribute 420,000 boxes of food to 1.68 million Malaysians affected by the Covid-19 crisis.

The program, which is being handled by the Women, Family and Community Development Ministry (KPWKM), is said to be themed around the concept of “whole of society” involving cooperation from both the government and the private sector.

Each household would only receive one box, however, exceptions will be made by the Social Welfare Department (JKM) should a family deserves more aid.

The PM explained that aid will be provided to targeted groups from the B40, M40 and T20 whose income had been affected by the pandemic.

We know where (they are), the ministry has records. I was informed by Datuk Rina (KPWKM Minister Datuk Seri Rina Mohd Harun) that the recipients will receive it. They will record it in their accounts that the person has received (the food basket). I feel that if we were to visit their homes, their kitchens would probably be full already.

How to get a food basket/box?

Malaysian citizens in need of assistance can apply for the national food basked program by:

How will people get it?

After an application has been confirmed, JKM will organise its Skuad Prihatin Negara (SPN) for distribution and delivery.

Food baskets will be delivered directly within 24-hours of making an application. However, delivery will depend on workdays, the number of daily applications and the location and topography of where it needs to go.

A 51-second video snippet of the PM explaining how the national food basket program worked was shared by local artist and activist Fahmi Reza Mohd Zarin on Twitter.

The tweet prompted many to argue that the PM’s comments on the #BenderaPutih and #BenderaHitam campaigns were insensitive to the plight of the people struggling with the effects of the pandemic.

Some were also triggered by the PM’s “bendera biru” or blue flag comment – dark blue being the colour known to be flown by the Perikatan Nasional (PN) coalition, and retrospectively, Barisan Nasional (BN).