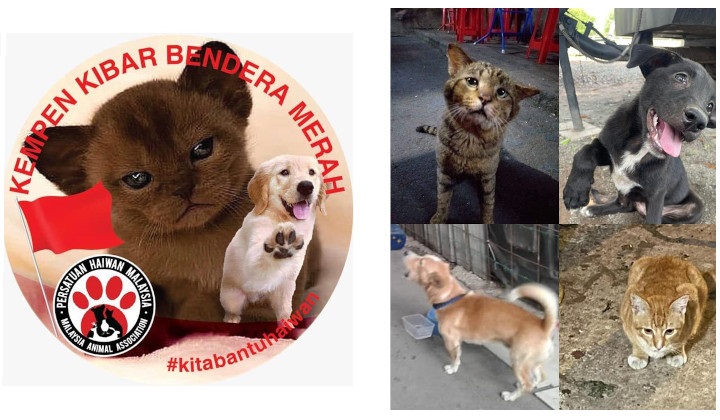 MAA President Arie Dwi Andika told the Malay Mail the observation was based on the increase of dogs and cats at certain areas where his volunteers feed the strays and not all of the animals are neutered.

The animals could have been abandoned due to their owners’ financial constraints caused by loss of jobs during the pandemic.

Most pets dumped are unable to cope with finding their own food so they end up dying of starvation while other animals get injured or die from road accidents.

The selfish act of abandoning, the selfless act of helping

In the MAA’s statement on their Facebook, most pets dumped are unable to cope with finding food so they end up dying of starvation while other animals get injured or die from injuries, trauma, or infectious diseases.

MAA pleas for all communities to look out for their neighbours and ask if they need food supply for neighbouring cats and dogs. And for those who are experiencing difficulties feeding their pets, let it be known with a red flag and don’t be afraid to ask as well.

Arie says that as of its launch, no one has raised their flag but MAA have been receiving pet food requests for their cats.

When welcoming a pet into your family, remember that it’s for the long term.

The start of the pandemic saw more people staying at home, which saw a 250% increase globally in dog and cat adoptions from 2019.

This could have attributed to the fact that more people were staying home and not only would they have more time to play with them, there had also been many studies that showed how owning a pet would be good for your mental health.

What was to come may have been expected as more and more people lost their jobs affecting not only their livelihood but those of their beloved fur children as well.

As selfless as we can sometimes be to other humans, we can also be very selfish to those without a voice – our pets.

Inspired by the White Flag Movement, the Red Flag movement was launched

30 June saw the start of the #BenderaMerah or Red Flag campaign for pet owners.

Just like how people who face hardship and need help are asked to fly the white flag in front of their homes, the red flag should be flown for those who require help in feeding their pets.

How you can help

If the White Flag movement has taught us anything is that Malaysians are quite charitable people.

That said, look out for your neighbours who have pets and don’t be afraid to ask if they need help with food.